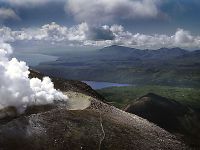 Didn't Japan lose the war? To listen to Japan's recent statements on the Kurile Islands, one would wonder exactly who won and who lost that war. Japan refuses to accept the reality that there are consequences for starting a war of aggression and for losing that war. No peace treaty has ever been concluded between Japan and Russia. The reason for this delay is the “Northern Territory” issue.

Located in the cold waters of the northwestern Pacific Ocean, the Kurile Islands stretch for 1,250 kilometers from the southern tip of the Kamchatka Peninsula southwards to the Japanese island of Hokkaido, thus forming a boundary between the Sea of Okhotsk (on the west) and the Pacific Ocean (on the east).

The Yalta Agreement was signed February 1945 by the USSR, USA and UK. It stated clearly and categorically: (Point 2) (a): The southern part of Sakhalin as well as the islands adjacent to it shall be returned to the Soviet Union; [...] 3. The Kurile Islands shall be handed over to the Soviet Union. The agreement concludes that “ The Heads of the three Great Powers have agreed that these claims of the Soviet Union shall be unquestionably fulfilled after Japan has been defeated.”

Furthermore, by signing the 1951 San Francisco Peace Treaty, Japan again also formally renounced all claims to the Kurile Islands. International law is on Russia's side as Russia's authority over the islands springs from the law that specifically states that a country may exercise its prerogative of conquest in war time.

Russia is exercising its prerogative as a nation that was in a state of war with Japan.

Japan wants the southern Kuriles, the islands of Kunashir, Habomai, Shikotan and Etorofu. Recently, Seiji Maehara, Japan's transport minister and state minister in charge of Okinawa and the Northern Territories, said Japan should continue its demands that Russia return the Kuril Islands and called Russia's presence there an "illegal occupation." The statement is totally absurd as can be seen by the post war agreements that were signed.

Japan has been building up its armed forces. Japanese conventional forces have become larger than Russia’s military stationed in the Far East and Japan’s air force, army and navy have considerably more state-of-the-art weapons and equipment.

Japan risks the possibility of damaging relations with Russia. Perhaps instead they had better concentrate on getting the US military out of their country. After all these years the Americans still have not gone home. Perhaps Japan should remember who were the ones who dropped two atomic bombs on their unarmed civilians and fire bombed other Japanese cities.

The Japanese government paid 217 billion Yen (US$ 2.0 billion) in 2007 as annual host-nation support.

Curiously, to look at some western media, they attempt to twist words and turn things inside out to deny Russia‘s legally binding claim. Again we see them attempting to not honor agreements they have made as they agitate Japan to pursue this stupid line of action. Naturally the US, with countless bases in Japan, would like to extend their reach at yet another entrance point towards Russian territory.

Russia highly values the rich fishing grounds of the North Pacific. The South Kuriles are a crucial asset economically because the seas around them are teeming with fish and other resources. The islands are also crucial for Russia's defenses because the straits give Russia's Pacific Fleet access to the high seas.

If Japan were to take over the South Kuriles, Russia would lose the ability to control the entry of foreign ships and submarines into the Sea of Okhotsk. This would give a potential enemy an opportunity to mount equipment to monitor Russian ships and submarines and sink them in case of a military conflict.

Tokyo has repeatedly insisted that it should regain all the islands. It is time for Japan to live in reality and not forget the horror, pain, death and destruction they caused during the war. They need to remember that they lost the war and be a little more humble and accepting so that relations with neighboring Russia can be conducted on a friendly and most of all an honest basis.