Venezuela’s Hugo Chavez harshly criticized the US-led politics at the close of ALBA – the summit of leftist Latin American nations – in Havana. 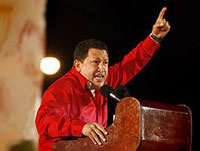 Chavez stated that the USA encircled Venezuela with army bases in Puerto Rico, Aruba, Curazao and Columbia, where the US army gained access to seven army bases. The USA will never be able to defeat Venezuela even if Americans build a thousand of bases, the Venezuelan leader said, Itar-Tass reports.

Bolivian President Evo Morales said that if the U.S. threatened Latin America militarily, the region would rise up and create "a second Vietnam." Chavez quipped that Obama was the winner of the "Nobel Prize of War."

"It's ridiculous, the threat of the secretary of state, and we aren't afraid of her," the Associated Press quoted Chavez as saying.

Chavez added that Venezuela was developing its ties with Iran and reminded that Iran’s Mahmoud Ahmadinejad had recently visited Brazil.

The Bolivarian Alliance for the Peoples of Our America, or ALBA is an international cooperation organization based on the idea of social, political, and economic integration between the countries of Latin America and the Caribbean. It is associated with socialist and social democratic governments and is an attempt at regional economic integration based on a vision of social welfare, bartering and mutual economic aid, rather than trade liberalization as with free trade agreements. ALBA nations are in the process of introducing a new regional currency, the SUCRE. It is intended to be the common virtual currency by 2010 and eventually a hard currency.