Berlusconi attack: Why did the wounds change sides? 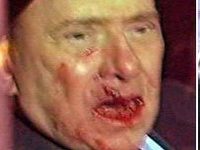 Berlusconi attack: Why did the wounds change sides?

Italian PM Silvio Berlusconi attacked in Milan. Wounds appear on right of face in some pictures and left in others.

A horrific and unacceptable attack by 42-year-old Massimo Tartaglia against Italy’s PM Silvio Berlusconi on Sunday evening left the Italian leader in hospital with minor cuts and two broken teeth. Silvio Berlusconi was attending a political rally in Milan.

Eye witnesses say that the attacker threw a statue of a replica of Milan cathedral at Mr. Berlusconi, who is recovering in hospital.

The large photograph shows the wounds on the right side of the face, while the small one shows them on the left.