North Korean government is ready to flee the country, suggested Hwang Jang-yop, a former secretary of the North’s Workers’ Party during a program on Free North Korea Radio, a Seoul-based anti-Pyongyang station. He himself fled the country for South Korea 12 years ago. 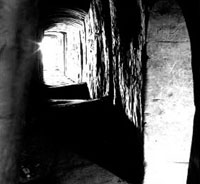 According to a statement made by 86-year old Hwang Jang-yop, there were secret tunnels built more than 984 feet below ground that stretch for some 31 miles.

He claimed that these tunnels could be used by the government not only to hide from a possible nuclear attack, but also to flee the country. He explained that the tunnels have been there since 1973.

One such tunnel linked Pyongyang to the port of Nampo on the shore of the Yellow Sea. This is the tunnel that might be used by the governing elite to escape to China in case of emergency.

The information about North Korea having the latest technologies in the field of underground construction is not new. In July, 2009, the West accused Pyongyang for building tunnels in Myanmar that were allegedly a part of the nuclear program developed in the country.

According to the dissident radio station Democratic Voice of Burma, North Korean engineers were building 800 tunnels equipped with electric generators.

Western TV channels showed relevant pictures and videos allegedly reflecting North Korean officials next to these objects. Some tunnels are so wide they can fit a truck. The tunnels also house warehouses for weapons and food.

According to a Swedish journalist Bertil Lintner, North Korean technologies became available to Hezbollah in Lebanon:

“In southern Lebanon following the 2006 war, Israel’s Defense Forces and the United Nations found several of the underground complexes, which by then had been abandoned by Hezbollah militants. By coincidence or not, these tunnels and underground rooms … are strikingly similar to those the South Koreans have unearthed under the Demilitarized Zone that separates South from North Korea.”

Besides, South Korean military stated on a number of occasions that the tunnels might be used against their country.

North Korean Special Operations Forces are designed to conduct raids in the enemy’s back areas by means of “sneak entry” that, according to Seoul, can be done using the tunnels.

Seoul also informed that by 1990, 7 underground tunnels were found and destroyed in the demilitarized area.

Pravda.ru interviewed Vladimir Khrustalev, an expert for North and South Korea of the Naval State University to find out if this information is true.

“There is a chain of tunnels in North Korea. Yet, I doubt that it was built so the North Korean elite could flee the country. Of course, they are trying to foresee different outcomes, including the most unpleasant ones, but it is hardly likely they intend to flee the country. Most likely, it’s the opposite situation, and the tunnels are built for the protection from missile and bombs attacks.

Similar underground structures were built on the Korean peninsula during the war of 1950-53. North Koreans learnt a lot from Chinese who were their allies at the time. During certain periods of war, American aviation was predominant in the air, and communist troops suffered serious losses.

This made them build deep tunnels. In certain areas, entire underground cities with developed that served for supplying aid to the front and evacuating those wounded.

The Chinese specialists who participated in the construction of North Korean underground tunnels provided important aid to Vietnamese in Dien Bien Phu battle against the French. They built reliable underground shelters connected with a chain of tunnels. Vietnamese artillery used these tunnels to shoot the French with impunity.

In 1960s, North Korea helped Vietnamese to fight the Americans. They helped to build reliable underground tunnels to deliver aid from the USSR and other allies.

During the entire existence of North Korea, fortification works have been conducted to strengthen the country’s defense. The tunnels and bunkers with important military and state objects are not limited to Pyongyang. “