US President Barack Obama accepted his Nobel Peace Prize in Oslo on December 10, but acknowledged the controversy over the award. In addition, a scandal marred Obama’s arrival for the official ceremony in Norway. Officials of Obama’s administration canceled the dinner with the Norwegian Nobel Committee, the news conference, the interview for television, the meeting with children, the concert, the attendance of an exhibition organized in honor of the laureate and even the scheduled lunch with the King of Norway. 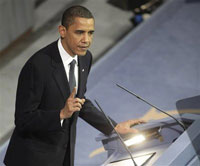 The fact that Obama canceled the lunch with the King of Norway insulted the whole nation, a Norwegian official said.

"Of all the things he is cancelling, I think the worst is cancelling the lunch with the king," Siv Jensen, the leader of Norway’s largest party in opposition said. "This is a central part of our government system. He should respect the monarchy," The Guardian quoted the official as saying.

“It seemed to me that day that I was listening to George Bush. His arguments did not differ much from the philosophy of his predecessor except for one fig leaf – Obama condemned tortures,” the ailing Cuban leader wrote for Granma.

“The politics, which the new administration suggests in Afghanistan, does not differ from that of Bush, who ordered to invade Iraq – the country that was not related to the Twin Towers terror acts,” Fidel Castro said.

"Why did Obama accept the Nobel Peace Prize when he'd already decided to fight the Afghanistan war to the last? He wasn't obliged to commit a cynical act," Castro wrote.

"The president of the United States doesn't say a word about the hundreds of thousands of people, including children and innocent elderly people, who have died in Iraq and Afghanistan, and about millions of Iraqis and Afghanis who suffer from consequences of the war, although are do not carry any responsibility for the events in New York,” Castro wrote in his article.

The Cuban leader believes that Obama delivered yet another theatrical speech in Oslo, pronounced a new set of phrases to justify the existence of the imperial superpower that has hundreds of army bases all over the world and 200 years of history of armed invasions.