Where is bad guy Osama bin Laden? This question still takes the minds of US political and military elite. US National Security Advisor James Jones believes that the prime suspect of 9/11 attacks is hiding in Pakistan. Defense Secretary Robert Gates later said that the Pentagon did not have the information to confirm the statement, for terrorist No. 1 would have been caught otherwise. 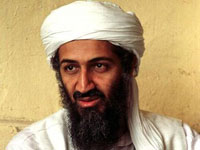 A special report from the US Senate said that the US military had a chance to capture Bin Laden alive, but they missed him during the first months of the Afghan campaign in 2001. Former Defense Secretary Donald Rumsfeld and General Tommy Franks are said to be accountable for that mistake.

According to US intelligence, Bin Laden was hiding in Tora Bora caves in the east of Afghanistan. US troops were prepared to storm the caves in December of 2001, but suddenly canceled the operation following the orders from Rumsfeld and Franks, who later said that they should concentrate their efforts in other directions.

The authors of the report believe that Bin Laden and his associates used the opportunity to escape to Pakistan, where he can probably be staying still. The officials, who prepared the report, referred to the information announced by Afghan Prime Minister Yusuf Gilani.

It is worthy of note that many US top officials believe that the prime suspect of 9/11 attacks masterminds resistance in Afghanistan and Pakistan. If Bin Laden is eventually captured will there be peace in the troubled region?

Valery Garbuzov, an expert with the Institute for the USA and Canada, said in an interview with Pravda.Ru that many US politicians do believe that the capture of al-Qaeda’s leader would help the situation in the region change for the better.

“Other officials take a more reasonable and cautious approach to the issue, but they are convinced that Bin Laden must be seized since he poses a serious danger to the United States after the terror attacks in 2001.

“They believe that the attacks were prepared in Afghanistan – that’s why they sent troops there to destroy terrorist camps not to let this happen again. Washington intends to continue doing that in the war-torn nation. However, US special services say that the number of al-Qaeda terrorists is not numerous at all - about a hundred of them is left as a result of eight years of struggle. Therefore, the international terrorist network is not that dangerous anymore,” the expert said.

Konstantin Sivkov, the vice president of the Academy for Geopolitical Sciences, stated that many of the gunmen, who fight against NATO troops in Afghanistan, are not related to al-Qaeda and Bin Laden. The war in Afghanistan is no longer the war of the Taliban movement – it became national resistance against foreign invaders in the face of the USA and its allies. Capturing Bin Laden is the last thing that the Americans want. They only imitate activities at this point to show everyone that they are looking for him.

“Let’s start with saying that Bin Laden was created by American special services to struggle against the Soviet military contingent in Afghanistan. It is a well-known fact. In 2001, Washington said that it was Osama who organized the terrorist acts. The acts were then used as the reason to invade Afghanistan and Iraq. Washington said that it would be struggling against terrorism there. Therefore, if they capture or kill Bin Laden, they will ruin their arguments justifying the presence of NATO troops in the two countries.

“If Bin Laden is killed, he will become a martyr for many Muslims, and they may decide to continue his deeds. Furthermore, US officials believe that terrorist organizations, including al-Qaeda, may split into many uncontrollable groups and it would become even more difficult to struggle against them. That is why there is nothing surprising about the fact that Rumsfeld and Franks canceled the storming of Tora Bora in 2001,” Mr. Sivkov said.