Residents of Switzerland who voted for banning the construction of minarets, made a stand against aggressive cultural expansion of the Muslims, said Roman Silantyev, a Russian sociologist Islamic expert. 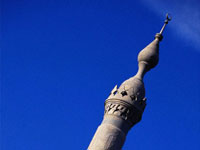 "Absence or presence of minarets does not interfere with the Muslims’ opportunity to pray. In old days, minarets were used to summon people for prayer, but these days almost everyone has a watch, a cell phone or an alarm clock. Minarets’ function is obsolete, therefore many are concerned with the idea of building more minarets,” Silantyev stated to Interfax-Religion portal.

He asked not to dramatize the situation. “Swiss Justice Minister clarified that the ban was aimed not against Muslims in general, but against extremist Muslims, since this issue is acute all over Europe,” the expert reminded.

He believes that the Swiss realized that the issue was not about satisfying religious demands of the Muslims, but about an attempt of aggressive expansion, and decided to put an end to it.

He also stressed that Muslim countries often get rid of the most religiously unreliable people who then move to developed countries where they are welcomed. Yet, these people do not appreciate welcoming atmosphere and do not understand that they are visitors and should respect the traditions of the countries they are visiting.

"Often pompous mosques with tall minarets are positioned not for prayers, but as challenging symbols of presence. This is the program implemented by a number of Arabic countries, when they build mosques larger than needed for their community,” the expert explained.

He mentioned that there were two dozens of similar cases in Russia, when hyper-mosques not correlated with the size of Muslim communities were planned for construction in a number of Russian cities. Only a threat of referendums in many cases made them reconsider the plans.

In conclusion, Silantyev expressed bewilderment regarding the fact that the issue of Swiss minarets concerns Islamic activists more than impending destruction of Moscow jami supported by Moscow Islamic Council.

As reported earlier, the Swiss supported the ban for the construction of minarets in the country at a referendum held on Sunday.