Europe Needs to Cast USA Aside Before It Is Too Late

The European Union needs the joint all-European army. The subject surfaced in the beginning of the 1990s, when European countries realized the scale of global changes after the fall of the iron curtain. 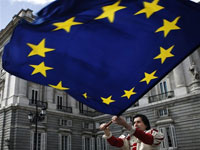 Europe Needs to Cast USA Aside Before It Is Too Late

The US administration is very negative about the idea. The question about the all-European army was pushed into the background after the Balkan war, when European armies were acting within the framework of KFOR and NATO. The USA believed that one needed to strengthen NATO, and everyone agreed. France was trying to show resistance to it, but after the nation became a full-fledged member of NATO on Sarkozy’s initiative, the French administration forgot about the creation of the all-European army too.

Things changed in 2009. The European Parliament established the Rapid Deployment Force of the European Union in 2009. Last week, officials of the Italian administration put forward a suggestion to look into the matter of the European Army again. Italy’s Foreign Minister Franco Frattini stated that Europe needed the army to deepen the European integration, optimize the spending on military operation in NATO and repulse possible threats.

It is worthy of note that every European country, which participates in the military operation in Afghanistan, has to maintain its contingent with arms and military hardware, although there can be bilateral agreements reached at this point. Europe could have a more rational approach to the issue once the continent has the joint army. For example, one country would supply tanks, another one – fighter jets, another one – communication systems, etc.

The European Union has a more important reason for creating the army. Europe wants to increase its weight in the world and turn into a real center of influence. Europe has not been happy with its role of America’s minor partner, not to mention its position of a subordinate member in NATO.

European leaders are also concerned about the global political revival of Asia and Africa. However, the biggest risk factor appeared with the creation of the union between the United States and China. Europe decided to create its Rapid Deployment Force soon after the presentation of the G2 project. Furthermore, the idea to create the joint EU Army was voiced against the background of the discussion of Obama’s visit to China.

If the USA and China unite into the G2, they will create the Pacific axis, and the Atlantic Alliance will be forgotten. The interests of America’s foreign policy has taken a different turn – to the East, which means that Europe must take care of its security.

"If we do not find a common foreign policy, there is the risk that Europe will become irrelevant. We will be bypassed by the G2 of America and China,” Mr. Frattini said.

It is not clear yet, if other European states are going to support Italy’s suggestion. It goes without saying that the countries of Eastern Europe are not going to do anything without preliminary consultations with Washington. Western Europe may not support Italy either: they are used to living in stability and would most likely not dare to do anything against the background of the economic crisis.

Frattini’s remarks have only sparked a discussion. Experts try to find out, who needs the European army and why, who wins from the implementation of the idea, who made it all up, and why it was Italy that started the commotion.

Some experts say that the EU does not need the army because it is a political, not a military organization. European countries prefer not to participate in military actions. They would rather subordinate to someone than get ready for war to defend their interests and territories.

It is not ruled out that Italy attempted to attract the USA’s attention and set out its concerns about the position of European countries at NATO. Most likely, Italy wants the US administration to know that the European Union does not want to participate in military intrigues of US politicians.

Other experts say that the creation of the common European force is good for Russia. Russia supposedly used its friendly relations with Italy and initiated Frattini’s statement to distract the EU from the USA and move forward with the implementation of Medvedev’s plans connected with the creation of the European security system.

Europe needs to get rid of America’s influence because the latter plans to betray its old-time partners for the sake of the new partnership – with China. The Washington-Beijing axis is a real threat, and Europe will be able to handle it only if it joins forces with Russia.