As Russia had said, Iraq did not have Weapons of Mass Destruction. The only source which claimed that Iraq had such weapons and was linked to Al Qaeda was the Bush regime. Now the first days of the Iraq Enquiry in London have blown the lid off the lies, the treachery, the skullduggery and the downright deceit, the web of lies spun by Bush and Co. Time for responsibility, time for accountability. 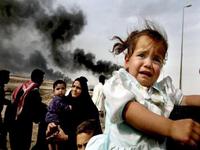 Before the Bush regime was swept to power by road blocks in Florida in November 2000, Condoleeza Rice was already writing articles about “regime change” in Baghdad and Bush was already speaking of revenge for President Hussein’s supposed attempt on the life of his “Daddy”.

There then ensued repeated claims from the Pentagon, which started to exert growing influence over the State Department, that Iraq not only had WMD, but was able to deploy them with “immediate” effect and posed a real danger to the USA and its allies. Claims were made to the UNO that WMD was being “driven around the desert in vehicles”, complete with photos of milk powder being presented and described as dangerous chemicals.

Anyone with an iota of intelligence could see that there was no evidence whatsoever and the proof presented for a causus belli was simply hearsay, rumour and conjecture. In short, paramount to someone in some rural backwater pointing at a villager from another village, saying “He’s a witch” and the poor man being set upon with machetes.

Attempts to claim Saddam Hussein had WMD, attempts to link Saddam Hussein to Al Qaeda were ridiculed in this column at the time, while the Bush regime and its puppy-dog sycophants in Europe were warned they were making a grave mistake.

Six and a half years on, the Iraq Enquiry in London proves us right and the perpetrators of this act of slaughter wrong. Among the wealth of evidence supporting our claims and relegating those of the Bush regime to an act of mass murder and war crimes is the following:

The British Foreign Office in 2003 had no evidence whatsoever that Saddam Hussein was trying to supply Al Qaeda with WMD a) because he didn’t have any and b) because he and Bin Laden hated one another;

Ministers had been warned that the American allegations were based on evidence that was “patchy”, according to Sir William Ehrman, Director of International Security at the Foreign Office;

There was evidence at the time of the invasion that the chemical weapons had indeed been decommissioned, while Hans Blix’s UN teams found nothing, just as after the invasion and ensuing act of slaughter no WMD was found;

Tim Dowse, Head of Counter-Proliferation at the Foreign Office, claimed that “there had been nothing that looked like a relationship between the Iraqis and Al Qaeda”;

Blair’s Government tried to distance itself from the Bush regime’s war plans at the beginning because they knew an invasion based on regime change was illegal;

Sir William Patey, Head of the Middle East department at the Foreign office, claimed that the invasion “had no basis in law”;

Lord Goldsmith, Attorney General in 2002, declared that regime change was “not a legal basis for military action”;

At the time of the invasion, Libya and Afghanistan, the Balkans and Sierra Leone were higher up on the list of preoccupations.

And the list goes on and on and on. So who was wrong? Who committed an act of wanton butchery based on pure fabrication? Who lied to their nations? Who sent their boys into battle under a false pretext, just so that the clique of elitists could grow richer and fatter? Whose friends gave him lists of artefacts from Baghdad’s museums, like a shopping list in return for support?

And who therefore is responsible and accountable?

Or does International Law not exist?