On November 22, Ukrainian democrats celebrated the fifth anniversary of the start of the Orange Revolution. The celebration is tear-stained because the heroes of Maidan drove Ukraine to its present miserable condition. 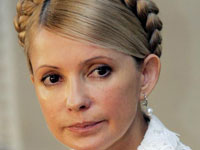 Viktor Yushchenko’s favorability rating does not exceed the margin of error. Yulia Tymoshenko still stays afloat, but the results of her activity as the Prime Minister leave much to be desired.

It was obvious to many that the current executive power in Ukraine is not capable of building a long-term development strategy. Until recently, it was assumed that Tymoshenko would be able to get to the Presidential Elections to be held on January 17, 2010 without bringing the country to an economic collapse.

There is not much time left till the election, and the seriousness of the economic situation in the country is unprecedented.

Here are some bright examples.

The author of the statement, referring to an informed source, told the forum participants about the current condition of the state treasury. According to his information, average daily balance of the treasury accounts within the last four weeks is one to two billion grivnas.

For the sake of comparison, a year ago this number was 30 to 36 billion grivnas, and last summer it was 16 to 18 billion. It is worth mentioning that the country spent borrowed money to meet the budget for the next three months.

Could it be that all this is just the machinations of envious tongues, and in reality Tymoshenko is a professional economist, talented leader and experienced crisis manager? Let’s see what the author of the unique strategy “The Ukrainian Breakthrough” has been up to these days.

Recently Yulia Tymoshenko realized that foreign countries are the only source of support. Last week, she met with the ambassadors of the Big Seven and announced that Ukraine could be only saved by dollar and euro loans.

Some of her statements were made before media representatives, which once again proved that the head of the Ukrainian government was quite desperate.

She told the ambassadors that if it had not been for the fruitful cooperation between Ukraine and the International Monetary Fund (IMF), it would have been impossible for Ukraine to survive the last year.

It seemed like Tymoshenko was counting for another IMF loan, but the Fund suspended it. First, the Fund representatives explained their rejection by unwillingness to influence the upcoming election. Then they indicated that they would continue collaboration with Ukraine if the branches of the Ukrainian government reached a consensus.

However, there is another reason why IMF refused to provide a loan to Ukraine.

It is well known that the Fund provides loans under very rigid conditions. Each new portion of a loan is transferred to recipients based on a thorough investigation of how the money was spent.

IMF required that Ukraine introduces some unpopular measures, including an increase in consumer gas prices every three months and freezing of salaries, pensions, and allowances. There were also other recommendations that have not been released to the public.

For some reason, Tymoshenko was convinced that her case would be an exception and ignored all IMF recommendations trying to win popularity.

Currently it is impossible to meet the Fund’s requirements since too much money has been spent on other things. Tymoshenko’s promises about meeting the IMF requirements after the election do not impress the officials, let alone meeting the requirement about a consensus between Tymoshenko and Yushchenko.

Having lost hope for IMF dollars, Tymoshenko is trying to find money in other pockets. She needs money here and now, since after the election the money can go to her competitor, not her.

There is an agreement between Ukraine and the European Commission about providing first “macro financial aid” of 500 million Euro. It is not much money, but it might be enough to survive until the New Year. However, Europe understands that this loan would likely not be paid back.

Europeans do not want to be the only ones to lose money, so they list the renewal of IMF loan as a stipulation for their loan. This is their naïve attempt to share the risk.

Tymoshenko is a natural oppositionist who is not recommended to hold office. She does not know how to make money, but likes spending it in ways that benefit her popularity during the pre-election period.

She spent everything, including tax money, and possibilities of emission are exhausted. The National Bank’s printing machine is in Yushchenko’s hands, and will hardly be turned on at Tymoshenko’s request. It becomes increasingly more difficult to get money to fulfill the promises.

Tymoshenko was appointed Head of the first orange government. Nine months later her government was forced to resign. Her block won parliament election of 2007 on the premise that the “unique government” did not have enough time to finish what it has started.

This time around Tymoshenko was given a chance to see the business through. Now, the system can collapse any moment. Let us hope that the shady oppositional government has access to objective information and can consider all options in the face of catastrophe.