On the 20th anniversary of the fall of the Berlin Wall, the world lives with a number of barriers that serve to restrain the free movement of people. The wall that divides the West Bank from Israel and preventing the passage of Mexican immigrants to the United States are the best known, but there are others. 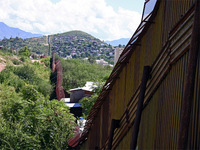 The latest example comes from Slovakia. In October, a wall 150 meters long and two meters high was erected in the city of Ostrovany, a rural community in the northeast of the country, in order to isolate a gypsy camp.

The action, approved in 2008 by local authorities and put into practice last week, is the last chapter of the growing tension between the inhabitants of the community and the Gypsies. The inhabitants of Ostrovany accuse them of stealing fruit from private gardens. Violent episodes were recorded, such as the death of a farmer by members of the gypsy community and far-right groups and events that qualify for what they call "terror gypsy".

The Mayor of Ostrovany, Cyril Revákl, told the Slovak daily SME that the measure is not racist. "I know there are many decent living among the Gypsies, but no one should go through the hell of daily clashes." The agency that represents the Roma announced that it will investigate the construction of the wall. The official, Ludovit Galbavý, described the construction as "discriminatory."

Israel and Palestine
One of the most current and controversial walls is that which separates Israel from Palestinian territory in the West Bank. A small portion (about 20%) coincides with the old Green Line border set in 1948, the remaining 80% are located on Palestinian land.
.
The wall began to be built in 2002, during the administration of former Israeli Prime Minister Ariel Sharon, with the justification to prevent the entry of terrorists into Israel. The International Criminal Court declared it illegal in 2004, because it cuts off Palestinian land and isolates about 450 thousand people. According to data from April 2006 supplied by Israel, the total length of the barrier is 721 km, of which 58.04 % is built, 8.96% under construction and 33% to be built. See the current map.

On Friday, on the eve of the anniversary of the fall of the Berlin Wall, young Palestinians knocked down (6) part of the construction in the Arab city of Naalin and were were reprimanded by Israeli soldiers with tear gas (pictured below). "No matter how high they are, all the walls will fall," proclaimed a banner on the structure placed by the young people.

For Israeli analyst, Michael Warschawski, director of the Center for Alternative Information, the wall has a double impact: "First, it condemns the Palestinians to live in a forced ghetto. Second, it reflects the distorted politics of the isolation of Israel, which prefers to solve their problems by separation."

According Warschawski, the ineffectiveness of the construction, which comes to divide entire cities, is proven. "The wall does not completely stop the movement of people. To cross the territories, there are alternatives."

USA and Mexico
In order to prevent the entry of illegal Mexican immigrants, the United States built a wall on the border 3,141 kilometers, which covers the states of Texas, California, New Mexico and Arizona.

Since 1994, when the wall was first built in the administration of former President Bill Clinton, more than 5.6 thousand people died trying to cross to the U.S. side, according to a report by the accounting office of the White House (GAO, is the acronym in English). Moreover, the causes of death have changed. Before they were mainly caused by traffic accidents, since the immigrants were running on highways in border areas. Now they happen from hypothermia in the desert or drowning in the Rio Grande.

The document also noted that costs are also high. Each time there is a hole, $1,300 are spent on repairs. The maintenance of the 1,058 km stretch with approximately two layers in the US-Mexico border is expected to cost 6.5 billion dollars over the next 20 years

"It's a waste of resources and creativity", said Jorge Mario Cabrera Valladares, of the Coalition for the Human Rights of Immigrants of Los Angeles (CHIRLA is the acronym in English), to the EFE news agency. "Our money paid in taxes is being wasted on an old and inefficient strategy instead of working on serious reform, long-term and applicable to immigration."

On this site, you can track the small histories of immigration along the border. In this movie, the directors show the work of the Beta group in the city of Nogales (pictured below), which seeks to convince the Mexicans not to cross over to the U.S. side.

Brazil
Rio de Janeiro also has its wall built with the argument to avoid poorly constructed homes in slums that destroy passages of the vegetation of the Atlantic forest. However, NGOs and social movements claim that it is actually a way to separate the richer parts of society from the most humble.
"There is no discrimination. On the contrary, we are building houses for them in all places and improving their lives," said Tania Lazzoli, spokesman for the Department of Public Works of the government.

In March, the Portuguese writer, Jose Saramago, criticized the action on his blog: "Here down in the Marvelous City, that of the samba and the carnival, the situation is not better. The idea now is to surround the slums with a wall of reinforced concrete three meters high. We had the Berlin Wall, we have the walls of Palestine, now the one of Rio. However, organized crime is rife everywhere, complicity vertical and horizontal, penetrate the state apparatus and society in general. "

In Santa Marta, already more than 600 meters of wall have been built, while in Rocinha the government agreed to limit it to areas with sliding risk. The remainder will be turned into ecological sites and nature reserves.