The Armed Face of Neoliberalism

Jasmin Hristov's book is an exploration of the history and evolution of armed paramilitary forces in Colombia, focusing primarily on the past two decades. Her stated intent is to "offer a model of a twenty-first-century state apparatus of coercion under a formally democratic regime by exploring the structure and functions of that apparatus, the conditions that make it a necessity, and its capacity to evolve into new forms" (p. xi). 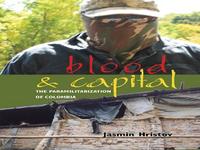 The Armed Face of Neoliberalism

Paying particular attention to this period not only makes her book especially relevant to an understanding of the current situation in this beautiful and catastrophic nation, but also highlights one of her central points: the intrinsic relationship between paramilitarism and neoliberal capitalism. The combination of neoliberalism and paramilitaries, while perhaps most drastically expressed in Colombia, is similarly present elsewhere throughout the region. Emphasizing this connection, even if through its most extreme example, has far-reaching implications for understanding a fundamental aspect of neoliberal economics as applied in Latin America -- the forcible dispossession of large groups of structurally disadvantaged people from their means of subsistence.

After describing the application of neoliberalism within the particular historical development of the sociopolitical and economic context of Colombia (chapter 1), Hristov details the current features of what she terms the "State coercive apparatus," or SCA (chapter 2). In this, she includes paramilitarism (chapters 3 and 5), defined as "the use of violence to advance the economic interests of a particular sector of society with the tolerance or support of the state" (p. 60). The book shows the dual function of violence in contemporary Colombia -- both as an instrument to suppress opposition and as a tool to enrich a privileged few.

As she notes, the role that technically illegal but in practice actively supported paramilitary groups play in the widespread violation of human rights, and the repression of opposition that these are intended to achieve, has been well documented. Her book, while attending to these features, offers a view of the ways in which this violence directly facilitates the acquisition of resources, and the subsequent concentration of wealth into the hands of a small elite class. This attention is one of the book's major and most important contributions, both for the study of human rights and for understanding the current political and socioeconomic situation in Colombia, with implications far beyond its borders.

By focusing on paramilitary violence in Colombia, Hristov takes as her subject matter one of the most acute situations for the violation of a wide spectrum of human rights in the contemporary world. She usefully includes concrete examples throughout the book to show how violence benefits the capitalist class while impoverishing the working majority (and, I would add, the structurally unemployed). Yet she seeks to resist allowing the acts of violence themselves to become the sole focus, as she argues that works that do so run the risk of actually obscuring the underlying engines of these atrocities. That sort of decontextualized approach, she says, is "incapable of identifying the ways in which the current profoundly uneven class structure fuels violence. . . . The detachment of violence from the totality of social relations in which it is embedded as well as the material foundations of society out of which it arises, limits greatly the understanding of the forces that drive it" (p. 11).

Though her intention is to move the study of human rights beyond attention to the violence and violations themselves, Hristov's book is only partially successful in carrying this through. The book relies on bullet-pointed lists of specific human rights violations, taken largely from media sources and presented as a way of exposing the concrete realities of violence for individual victims (especially chapter 4).

Certainly this intention is laudable, particularly when framing it, as she does, as part of an overall objective to practice social research in ways that work to transform material conditions, inspired by Paulo Freire's injunction to allow the major questions to "arise from the concrete social reality of the protagonists in the Colombian conflict" (p. xi). Nonetheless, this is a problem in describing a situation where "facts" are so difficult to come by and so easily manufactured. I say this not to doubt the veracity of any of the instances she presents; the sources she draws on have undertaken the dangerous and essential task of documenting cases of violence perpetrated by powerful actors. Yet from an analytic perspective, theamount of space she dedicates to repeating the cases reported by independent news agencies and NGOs seems to miss the point. Rather than working to establish the "truth" through facts, it seems that the analysis could have been more fruitfully centered on how the circulation of "facts" operates and the effects it has.

Relatedly, she hints at but does not follow through on some of the other issues involved in discussing human rights in Colombia. As she notes, discourses of human rights are deployed by numerous groups within and across the nation, in ways that carefully attend to their own agendas. One telling example is provided by the Alvaro Uribe administration, which simultaneously proclaims citizen security a human right that the state must protect, while accusing those who appeal to the need to respect other human rights to be acting in the service of the guerilla by trying to tie the state's hands. Glimpses of these competing discourses of human rights in the book leave open questions ripe for further exploration.

Hristov makes effective use of ethnographic vignettes in describing the effects of the macro-processes of the armed conflict on the lives of individual people, an addition that usefully illustrates the micro-dimension of the issues she raises. More attention could have been paid to the shifting dynamics of this micro-dimension, where competing situational and even internally contradictory sets of interests present each individual/group involved with a certain opportunity structure at every juncture. Focusing the analysis on these unstable networks could perhaps have revealed more of the ways in which these decentralized and competing interests fuel the system, in addition to and in conjunction with the application of neoliberalism. Reference to other authors who have engaged in describing the complicated dynamics at work in perpetuating the cycles of violence remains conspicuously absent or under-explored, limiting the book's engagement with highly relevant academic debates.

This book serves a vital role in debunking the propaganda and misinformation that so often circulates in the English-language media, including the portrayals of the recent "demilitarization" process, which purportedly dismantled the structure of the paramilitary but which, as she exposes in detail, only resulted in its adoption of new forms. It stands as an important compilation of media sources and reporting that does not adhere to the master narrative about Colombia, as frequently presented and constructed through the mainstream U.S. media and government reports. In addition, she carefully details the structural features of the current political economic system in Colombia, which, as she convincingly argues, operates as "a twenty-first century apparatus of coercion accommodated under a democratic regime" (p. 202). She includes a detailed chapter on the history, aims, and repression of one indigenous activist group, the Consejo Regional Indígena de Cauca (Regional Indigenous Council of Cauca, CRIC) (chapter 6), enabling readers to appreciate the difficulties involved in any attempt at resisting the appropriation of land and resources.

Accessible to a general readership, the book is a valuable description of the violence and the many violations of human rights in ways that reveal rather than obfuscate the roots and causes of the perpetuation of the conflict. By making explicit the connections between neoliberal policies and paramilitarism, and the use of violence as a means of resource acquisition and the facilitation of a climate for its continuation, Hristov powerfully refutes attempts to oversimplify the conflict in Colombia and its justification as part of the "war on terror." The recent recertification of Colombia's human rights record by the U.S. State Department (September 2009) and the approval by the U.S. and Colombian governments for the use of seven Colombian military installations by U.S. military personnel (August 2009) makes this understanding all the more vital, and her book all the more timely and relevant.

The Armed Face of Neoliberalism
by Karen Faulk

Karen Faulk is Adjunct Professor at the Department of History and Anthropology of Carnegie Mellon University. This review was first published by H-Human-Rights (November 2009) under a Creative Commons license

From the Portuguese Version