The dramatic presidential election race in Afghanistan seems to be nearing its completion. After Karzai's only challenger, Abdullah Abdullah, dropped out of the race, Hamid Karzai was declared the winner of the election. 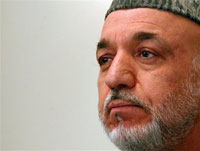 "The Independent Election Commission [IEC] declares the esteemed Hamid Karzai as the president … because he was the winner of the first round and the only candidate in the second round," the commission's representative told reporters at a press-conference.

The commission stated that the second round was cancelled to save money, and to avoid political and economic complications.

Does this mean that Hamid Karzai will become the legitimate President of the Islamic Republic again? His first term was not impeccable in regard to the constitutional rights of Afghani people, and the Taliban called him a “puppet of the West.”

Meanwhile, the forces of the international coalition that have been conducting antiterrorist operations in Afghanistan under the guidance the UN for over six years, would very much like to be successful. Since the successful war actions are hardly likely, the coalition would be satisfied with the success in the legal field where various international organizations tried to demonstrate the principles of democracy in action.

So what has happened?

According to the preliminary results of the first round held in August, Karzai gained enough votes to win the election. However, the votes were re-counted due to numerous violations and fraud.

Hundreds of thousands of votes cast at the elections were cancelled. As a result, Karzai gained less than 50 percent of votes required to win the election in the first round. However, it took the Afghani President a long time to agree to the second round run-off.

These electoral disagreements caused political vacuum in the country. The state of affairs worsened when the Taliban conducted a number of daring terrorist attacks. The last attack aimed at the UN guesthouse in Kabul resulted in deaths of six UN employees.

Finally, Karzai succumbed to persuasion. The second round of the Presidential election was to be held on November 7. However, Karzai’s main and the only challenger requested that some members of the Election Commission resign, stating that otherwise the election would not be fair.

Hamid Karzai had rejected the demand. He explained that changes would not be beneficial neither for the election, nor for the country.

The issue of legitimacy of Karzai’s new presidential term should affect Obama’s decision regarding sending 40,000 additional soldiers to Afghanistan.

After Karzai was declared the winner of the election, Obama appealed to the Afghani leader in a phone conversation asking him to ”write a new chapter,” hinting that the final results of the election were controversial.

Obama reported that he congratulated Karzai with reelection. The American President called the process "messy," but said that Karzai won in accordance with Afghan law. He said that Karzai assured him that he understood the importance of the moment. Obama told him that the evidence should be reflected by actions, not words. He also urged Karzai to activate his efforts in eliminating corruption.

Earlier, Ban Ki-moon, Secretary-General of the UN, stated in Kabul that Afghan election was one the most complicated elections supported by the United Nations.

Soon, Hamid Karzai will officially assume office. But how well the President and his government control the situation in the country?

There are increasing disagreements between the members of the international coalition regarding continuation of the peace support mission in Afghanistan. The Afghan national army and police would not stand a week against the Taliban, should the Western military troops leave the country.

It seems that Karzai’s victory in the election, highly-publicized in the West as a triumph of democracy, can be deemed hollow.

The Afghan government is still incapable of taking the lead when it comes to national safety.

The international coalition is finding that its forces only support the Kabul regime which is not recognized by a significant part of the Afghan people and completely rejected by the Taliban who is strengthening its hand.