The Country With No Poverty Interested in Buying Russian Arms

The Sultan of Brunei, Hassanal Bolkiah, made an official visit to Russia on October 12-17. 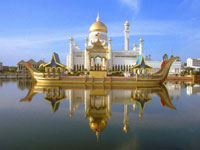 The Country With No Poverty Interested in Buying Russian Arms

The relations between Russia and Brunei have been developing very fast recently. Russia has recently opened its embassy in the capital of Brunei, the city of Bandar Seri Begawan. The two countries established diplomatic relations in 1991, but there were no diplomatic missions opened in the countries before.

Brunei is a tiny, but one of the wealthiest nations in the world with over $35,000 income per capita. Experts describe the nation as the country where there is no poverty.

Indeed, all citizens of Brunei use free of charge high-quality healthcare services and receive financial support for free studies in any foreign country.

The Sultan of Brunei is the head of state, the chairman of the government, the finance minister and the defense minister – all in one.

The Sultan controls the police, the anti-corruption bureau and supervises the income from oil and gas extraction – the basis of the national wealth.

The Sultan’s Palace is the central place of interest in the country. The palace has 1,788 rooms and sits on ten squares of land. Sultan’s garage can house hundreds of cars; there is also a helipad and stables for 200 pedigreed horses.

The palace made of marble and gold cost the Sultan about $500 million, not to mention the cost of highly expensive paintings and sculptures.

The worlds’ most expensive hotel, Empire, is located in Brunei too. The construction of the hotel cost the nation $2.7 billion . The hotel, like the Sultan’s Palace, is stuffed with gold: there are golden toilets, golden door knobs and so on and so forth.

The citizens of Brunei are happy people. They receive gifts on Sultan’s birthdays, use interest-free loans and enjoy many other benefits from their state. There is no political struggle in the country because there are no parties there. There is no opposition, no independent media, no election system. There is the absolutist form of government in Brunei.

“The Sultan is interested in developing economic and investment relations with Russia. Hassanal Bolkiah shows an interest in the Russian weapons too,” Anatoly Golubev, an expert for Asia and Africa told Pravda.Ru.

The Sultan already conducts negotiations with Russia’s Rosoboronexport (defense export giant) regarding the purchase of missile defense systems, Ka-52 choppers and other weaponry.

Brunei is one of the world’s leading producers of liquefied gas. It mines 12.7 million tons of oil every year. Russian oil and gas companies have all chances to appear in Brunei together with Royal Dutch Shell and Total.