Ukraine Happy to Celebrate Nazism and Liberation from Nazism At Once 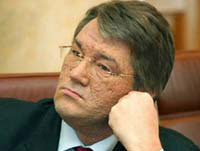 Ukraine Happy to Celebrate Nazism and Liberation from Nazism At Once

He signed another decree, “Decree of awarding military and special ranks to the citizens of Ukraine who participated in the military actions and to the invalids of World War II and Japanese war.”

The Ukrainian President believes that “Establishing the day of liberation of Ukraine is aimed at the public glorification of warriors, respecting the memory of thousands of people who perished while defending Ukrainian territory and those who died on the occupied territory, in concentration camps, and fascist colonies.”

On October 28, 1944, during the Carpathian offensive operation, the Soviet troops completed the liberation of the long-suffering Ukrainian land. Within the period between June 22, 1941 and October 28, 1944, the republic lost nine out of its 35-million-strong population.

Over 700 cities, 28,000 villages and over 16,000 industrial facilities were destroyed during the war in Ukraine. Total losses of the Ukrainian economy amounted to 40 percent.

Therefore, Victor Yushchenko claims that the celebration of “The day of liberation of Ukraine from the fascist invaders” on October 28 will aid in a thorough study of the events that took place in Ukraine during World War II and allow determining Ukrainian contribution to the victory.

How are this noble statement and signing of the decree connected with the events that took place a little earlier? On October 14, the President participated in the celebration of the 67th anniversary of the creation of the Ukrainian Rebel Army.

The Ukrainian Rebel Army was the army that cooperated with fascists and destroyed those who helped to liberate Ukraine and whom Yushchenko decided to pay tribute to.

On October 14, the anniversary was celebrated in West Ukraine with much pomp. Banderovites’ parade took place in Kiev. Opponents of the parade were not allowed to have their own demonstration.

In 1943-1944 the Ukrainian Rebel Army performed mass executions of Jewish, Polish and Ukrainian population. On many occasions the army actively participated in battles against soviet guerillas along with the Nazis.

However, during the final stage of the war certain divisions of the Ukrainian Rebel Army attacked German troops fleeing Russia. Therefore, the army leaders claimed that the army was fighting both against the Nazis and communists.

Initially, Banderovites were the Nazis’ allies. On June 30, 1941 the Organization of Ukrainian Nationalists (OUN) proclaimed the establishment of the Ukrainian State allied with the Great Germany and headed by Stepan Bandera.

Lately, under Victor Yushchenko, rampant glorification of the real Nazis, such as the Officer Roman Shukhevich or SS-men, took place.

The Ukrainian President who earned the reputation of a person who overturned the role of the soviet army in the World War II is now celebrating it. Why? Pravda.ru interviewed Vladimir Skachko, a Ukrainian political analyst, and Irina Berezhnaya, a representative of the Verkhovna Rada of Ukraine, the Party of Regions, to find out.

“Within the last five years the “orange power” in Ukraine got too involved in the process of remaking the history. Involved in political battles, the officials forgot that this year Ukraine celebrates the 65th anniversary of the liberation from fascist invaders.

Through this decree Yushchenko decided once again to speculate on historical theme. The President’s front office believes that this is his last attempt to raise his rating that is now very low.

President Yushchenko was always famous with his ability to interpret history in unique ways, supporting the actions of the Ukrainian Rebel Army and OUN and proclaiming pseudo-heroes like Bandera and Shukhevich.

Now Yushchenko decided to “flirt” with many citizens who support the historical truth of World War II.

I would like to emphasize that the said decree states that the day of the liberation of Ukraine from fascist invaders was established with the purpose of “reverence of the heroic deed and sacrifice of the Ukrainian people during World War II.”

I think this statement is historically and politically incorrect. The Party of Regions always believed that October 28 is the symbol of mutual victory of all people-members of the former USSR. We all know that 3.5 million of soviet soldiers died liberating Ukraine, and they were not exclusively Ukrainians.”

I believe that this is a good decree, one of a few good things done by our President. He might have a moment of enlightenment…

This is not his repentance for making the Nazis heroes. By signing this decree, Yushchenko is trying to win the part of the electorate represented by veterans, which is larger than the part represented by supporters of Banderovites.