The forthcoming presidential election in Ukraine may end with a coup or the establishment of either monarchy or dictatorship. 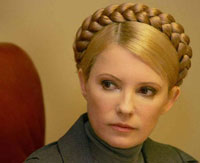 “We are going through a very serious political crisis at the moment. All of us, including the leading political forces, declare that there are numerous violations of the Constitution and human right taking place in the nation. Either the president of the country or the civil society must put forward an alternative now,” Yury Zbitnev, the leader of New Force Party said.

An expert with Research and Branding Group, Yevgeny Kopatko, said that Ukraine had been experiencing fundamental economic, political and public changes during the recent five years.

“The situation will change after the election, because there is a huge demand on changes in the Ukrainian society at the moment. No one knows whether this change is going to be legitimate, though,” he said.

Georgy Kryuchkov, the secretary of the Ukrainian Forum political association, believes that the election will not become a way out of the crisis – the nation will remain split anyway. Only a strong and charismatic politician, like, for example, Charles de Gaulle or Margaret Thatcher can win the support of the nation, because the Ukrainians are fed up with the madhouse of politics in the country, the politician believes.

“If Yulia Tymoshenko wins the election – she is the only one who has the opportunity to control the government – she will make the nation’s head spin when she starts changing everything very quickly. She will be the Ukrainian blend of Margaret Thatcher, Nicolas Sarkozy, Alexander Lukashenko, Putin and Berlusconi,” Vladimir Fesenko, the director of Ukraine’s Penta Political Analysis Center said.