Bolivia and Ecuador may soon recognize Abkhazia and South Ossetia – the two countries, which Russia officially recognized as independent states as a result of the armed conflict with Georgia in August 2008. 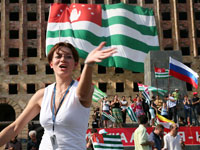 Nikolai Patrushev, the Secretary of Russia’s Security Council, has recently visited Latin America. Bolivia, Ecuador and other countries of the Bolivarian Alternative for the Americas (ALBA) may soon recognize the independence of the two countries.

The president of Ecuador is expected to arrive in Moscow at the end of October to discuss an opportunity for a Russian loan too.

Sergey Markov, the director of the Institute of Political Research, said that Russia had no special interest to have South Ossetia and Abkhazia recognized internationally.

“Moscow does not take any special actions to recognize South Ossetia and Abkhazia. However, it’s always good when other countries can do it because it shows that Washington is not that mighty as it pretends to be,” the expert said.