US Secretary of State Hillary Clinton conducted negotiations in Moscow yesterday with President Dmitry Medvedev and her Russian counterpart, Sergey Lavrov. There were no documents signed as a result of the talks. Nevertheless, the two ministers stated that Moscow and Washington had achieved progress in terms of strategic arms reduction and the Iranian nuclear program. 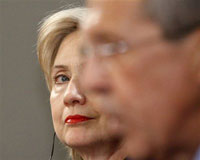 Mrs. Clinton and Mr. Lavrov looked happy with each other after the talks.

“I, unfortunately, was not able to come during the summit between our presidents because I broke my elbow, but now both my elbow and our relationship are reset and we’re moving forward, which I greatly welcome,” Clinton said in the beginning of the news conference.

Both Clinton and Lavrov acknowledged that the reset of the US-Russian relations announced by presidents Medvedev and Obama was developing successfully. Sergey Lavrov said that the work of the new US-Russian committee, established as a result of Barack Obama’s visit to Moscow in July, was one of the first achievements to indicate the reset process.

Sergey Lavrov again praised US President Barack Obama for his decision to shelve missile defense systems plans in Eastern Europe. However, the minister added, Russia would need to take a closer look at the new plans to study the details.

Hillary Clinton said that the USA was intended to create the missile defense system with Russia’s participation.

"I will be the first to tell you that we have people, and you have people in your government, who are still living in the past. They do not believe that the United States and Russia can cooperate to this extent," Clinton said.

"They do not trust each other, and we have to prove them wrong. That is our goal. Our goal is to be as cooperative as we can."