The Global Migration of Flying Shoes 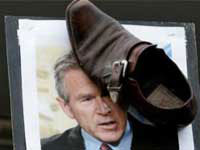 The Global Migration of Flying Shoes

Iraqi journalist Muntadhar al Zaidi became the pioneer of such a form of protest on December 14, 2008. He became internationally known in one day after he threw his two shoes at then-President George Bush during his visit to Baghdad.

“This is your farewell kiss, you dog! This is from the widows, orphans and everyone killed in Iraq!” the journalist screamed.

Bush showed that he was very good at showing quick reaction as he skillfully ducked from the flying leather shells. The journalist was arrested immediately.

The shoe-thrower was sentenced to three years on March 12, 2009. Al Zaidi did not plead guilty, and only said that his behavior was a natural response to the occupation. He became a national hero for many Iraqis.

The journalist was released prior to the end of his term on September 15. Zaidi said that he was taken to another room and beaten there even at the moment when Bush continued his conference.

"At the time that (Iraqi) Prime Minister Nuri al-Maliki said on television that he could not sleep without being reassured on my fate ... I was being tortured in the worst ways, beaten with electric cables and iron bars," he was quoted by Agence France-Presse as saying.

However he remained defiant about the incident that landed him in prison.

"I got my chance and I didn't miss it," he told reporters.

A Saudi land owner said that he would be ready to purchase the legendary shoes for $10 million. However, Iraqi and US special services destroyed the shoes soon after the incident.

Brazilian President Lula da Silva joked to reporters in December of 2008 during the summit of South American States, which Brazil hosted. “Don’t throw any shoes! It’s very hot there, and if someone removes their shoes, we will know about it because of the smell,” da Silva said.

He added that he would throw his shoes at Venezuelan counterpart Hugo Chavez, if the latter spoke longer than needed. The two politicians simply smiled at each other, and that was it.

Shoes continued flying in Europe. Martin Jahnke, from Darwin College at the University of Cambridge, threw his shoe at the Chinese prime minister on February 2009. That became the student’s protest against the violation of human rights in China.

The student was expected to be sentenced to 6 months, but was acquitted on June 2.

A shoe was flying towards Israel’s Ambassador to Sweden on February in Stockholm. The police arrested two young men, who said that they had thrown the shoe protesting against the Israel-led operation in the Gaza Strip in which many civilians were killed.

The incident with Indian Prime Minister Manmohan Singh is the most memorable one, though. A flying shoe hit him as he was delivering a pre-election speech at Ahmadabad.

There was only one flying shoe on the post-Soviet space – in Georgia. The incident took place on August 30 with Georgian President Mikhail Saakashvili as he was talking to young people at a dance floor in the resort town of Ganmukhuri.

Officials with the Georgian administration never confirmed the incident; the footage was never shown on pro-governmental channels of the country either. However, the shoe-thrower was arrested.

For the time being, the last shoe could be seen flying at Dominique Strauss-Kahn, the IMF Managing Director, as he was speaking at a high school in Istanbul. An overemotional Turkish student threw his shoe at the official, but missed.