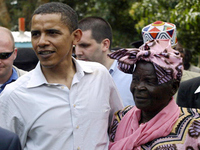 It is entirely to do with the international community sending a clear sign to the United States of America that the will is there to welcome the prodigal son back into the fold, but on certain conditions. And everyone knows this.

And the fact that there are any conditions at all is a disgrace and a total humiliation for the nation which purported to be the saviour of the free and the bastion of freedom and democracy for two centuries, it is a clear sign that these noble precepts were insulted to their core by a succession of administrations pandering to the interests of the clique of corporate elitists which had Washington’s throat in their grasp and which controlled the United Sates of America’s foreign policy.

The personification of this violation of the good will of the Founding Fathers was the Bush regime, complete with a panoply of jokers, devils, demons and the worst side of humanity, too visible in the Afghanistan conundrum and the foreign policy disaster called Iraq, where civilian structures were targeted with military hardware, where billionaire rebuilding contracts were doled out to White House cronies, without tender of course, and where terrorists were paid off not to attack the good ol’ boys.

However evil the Bush regime may have been and however much the arrogance or sheer idiocy of George W. Bush may have rankled with the hearts and minds of the thinking international community in his goodbye speech (a pityful attempt at self-justification) one has to remember that the Bush regime followed the Clinton regime, the one which launched an illegal attack against the people of Serbia, just because Hillbilly Billy had his underpants in a twist after lying to his nation and not having sexual relations with an intern, problems with dresses and sperm, the one whose lying first lady did not land under fire in Bosnia. Kind of like the type of thing that is so easy to forget, right? Yet one thing is forgetting what happened, it is far more serious when things that did not happen are remembered, relagating the perpetrator to the realms of psychiatry… or Pinocchio. And wow, there she is as Secretary of State!

So few speak of the billions of dollars offered to Mohammad Omar back in 1998 to build the gas pipeline across Afghanistan, his refusal and consequent declaration to Dawn newspaper at the time that the USA would find a pretext to invade. So it was not only the Bush regime.

With Obama comes a promise to listen and to talk. And nine months on, it is patently obvious that he is well-meaning, sincere, intelligent, articulate and indeed, a President the people of the United States of America can be proud to have. Being intelligent, he knows he was elected by the people of the USA, not the rest of the world and he knows that his mandate starts and stops at his shores.

And it is due to his low-key, diligent, respectful, polite and engaged attitude that he has deservedly been awarded the Nobel Peace Prize, not necessarily for what he has done but for what he promises to do. The first sign was the declaration that the concentration camp at Guantanamo Bay would be decommissioned, the second was the abandoning of the idiotic Missile Defence Shield (as if North Korea would fire a missile westwards over Asia, Europe and the Atlantic, when a salvo eastwards would blitz the West Coast).

True, there are pressing foreign policy issues which require management by experts, not bigots. An implosion of Iraq, held together by President Saddam Hussein, who kept Al Qaeda out, and made that much more likely by the illegal act of butchery led by the USA, could have catastrophic consequences for the region. An unintelligent policy continuation in Afghanistan could see Al Qaeda buoyed with victory, the consequences of which would be felt on the streets of Europe and the US for decades to come. Then the epicentre, the spider in the middle of the web, Israel – the country which refuses to abide by international law, which invades its neighbours, steals their territory and sits on nuclear missiles, while Iran is denied the right to a peaceful nuclear programme.

Troubled times, which need to be answered with intelligence and by a united international community based upon common values and a multilateral approach. Those who stated that all Americans were obese and stupid were as idiotic as their supposed target, as well as being racist bigots. It is a positive sign that the USA has managed to produce the very best of itself, personified by its new President.

And it is for this reason that Barack Obama receives, and deservedly, the Nobel Peace Prize of collective hope for the future. Welcome back.