Estonia, a former Soviet republic, has generated another anti-Russian controversy. The scandal is connected with the monument, albeit not to the Soviet warrior, which was removed from the center of Tallinn several years ago. This time the scandal is about the monument to Peter the Great, which is supposed to be erected in the center of the city of Narva next year. 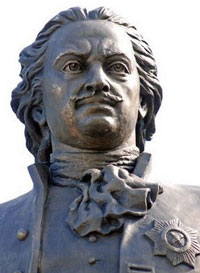 The name of the person, who dislikes the idea of the monument to the renowned Russian emperor to appear in Narva is the same, who initiated the dismantling of the Warrior the Liberator monument in Tallinn, the capital of Estonia. This is the Estonian Prime Minister Andrus Ansip, who probably sees the struggle with “Russian monuments” as his lifetime goal.

Here is the background of the story. Konstantin Rudkovsky, a now-deceased pensioner, a resident of Tallinn, offered to erect in Narva a smaller copy of the monument to Peter the Great, which could be seen in Kadriorg, the presidential palace in Tallinn, before 1940. The monument disappeared in 1940, after the Red Army entered the city.

The city of Narva was one of the central battlefields during the Northern War of 1700-1721, which was the triumph of the Russian army and Emperor Peter I. One of the squares of the city was named after the emperor. The local municipal administration, where Russian-speaking deputies are the majority, was very enthusiastic about the idea to erect the monument to Peter the Great.

Narva’s city administration approved the installment of the monument on September 30. Vice Mayor Andrey Filippov said that the monument would appear in June 2010.

However, Estonian Prime Minister Andrus Ansip harshly criticized the initiative. He ordered to dismantle the Bronze Soldier monument in Tallinn since it was a symbol of the “Soviet occupation” as the official claimed. The prime minister intended to clear the nation of the “totalitarian legacy,” and the mass grave underneath the Bronze Soldier did not stop him.

Peter the Great can not be labeled as a symbol of the “Soviet occupation.” However, he was the tsar, who annexed the lands, populated by Estonians, to Russia.

That is why the tsar stood up against the idea to erect the monument to Peter the Great in Narva and claimed that the monarch was the executioner of the Estonian nation.

“I treat Peter I very negatively. I think he is a butcher. I have no reasons to respect Peter. He deported people from my native town. I think that the residents of Narva have no reason to be grateful to Peter either. It goes about a murderer and invader, the monument to whom does not belong to the land of Estonia,” Ansip said on a national radio channel September 26.

It seems that the prime minister has forgotten that no one wanted to remove the monument to Peter the Great from the Estonian republic, which existed from 1920 to 1940. No one called the Russian emperor the “butcher.” Moreover, the monument was installed in the Kadriorg Palace – the residence of the Estonian president.

Many Estonians treat the Russian emperor positively for giving them an opportunity to develop their culture and save it from the German influence. Many, of course, say that Peter preserved the law of serfdom, but there are no facts to prove that the emperor was exterminating the Estonians on their nationality.

The Estonian prime minister goes beyond his authority as he tries to struggle against the monument. Such questions as erecting monuments make the competence of local authorities. It is worthy of note that Edgar Savisaar, the Mayor of Tallinn, objected against the removal of the Bronze Soldier two years ago, but the monument was dismantled anyway.

Mikhail Stalnukhin, a senior official with the Narva city administration, said September 30 that the residents of Narva with up to 90 percent of Russian-speakers among them, had their own history and their own opinion.

It seems that the Estonian PM is perfectly fine with the Swedish Lion monument in Narva, which was erected in honor of Peter’s rival, King Charles XII of Sweden. Most likely, the official simply has a strong aversion to anything related to Russia and Russians.

If it is so, the prime minister strikes 200 years out of Estonia’s history and humiliates the Russian-speaking citizens of Estonia, which make a third of the country’s population.