Hitler Died Peacefully in His Bed in Argentina?

The death of Adolf Hitler still remains one of the biggest mysteries in history. There are numerous theories that mostly come down to speculation that the Nazi leader didn’t die in his bunker, but managed to escape and hide. He allegedly was hiding for years and peacefully died in his own bed. 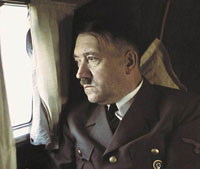 Hitler Died Peacefully in His Bed in Argentina?

A few days ago scientists received the evidence that these theories might not be that far from truth. The scull fragment that was thought to be Hitler’s turned out to be the remains of a woman.

For a long time historians believed that the fragment proved that on April 30th, 1945, the Führer took a cyanide pill and shot his head off when he realized that the Third Reich was over. His mistress Eva Braun committed suicide in the same bunker.

According to numerous witnesses, their bodies were wrapped in blankets and taken out of the bunker to a nearby garden. The bodies were soaked with petroleum, set on fire, and later buried. In 1945, Soviet special agents excavated the place of a likely burial and found the bones that were believed to be Hitler’s.

A part of the skull was missing, which showed that the death was caused by a bullet. The preserved jaw fragment coincided with the dental records found at the office of Hitler’s dentist. A year later, the missing fragment was found by the order of Stalin who had suspicions that Hitler managed to escape and hide.

In the mid 1950s, after Stalin’s death, the skeleton that was presumably Hitler’s was buried in Magdeburg, East Germany. In 1970, the skeleton was dug out by the KGB agents.

Only the jawbone, the skull fragment and the bloodstained sofa segments were preserved. The findings were sent to the KGB archives.

American specialists examined the bone fragments. According to Connecticut archaeologist Nick Bellantoni, the bone seemed very thin, male bone tends to be more robust. Besides, the sutures where the skull plates come together seemed to correspond to someone under 40. In 1945 Hitler turned 56.

Bellantoni believes that the studied bone fragment could not belong to Eva Braun either, although she died at 33. "There is no report of Eva Braun having shot herself or having been shot afterwards. It could be anyone. Many people were killed around the bunker area,” the scientist said.

Nick Bellantoni received the bone tissue that was believed to belong to Hitler in Moscow, where the fragments were kept in the Russian State Archives and even displayed at an exhibition in 2000.

The researcher was shown the bloodstained upholstery from the bunker sofa which was believed to be Hitler’s and Braun’s deathbed.

"I had the reference photos the Soviets took of the sofa in 1945 and I was seeing the exact same stains on the fragments of wood and fabric in front of me, so I knew I was working with the real thing," said the archeologists. The results of the research will be used as the basis for the US documentary Hitler's Escape.

Bellantoni was allowed only one hour in the archives, during which time he applied cotton swabs and took DNA samples that were sent to Connecticut right away. Linda Strausbaugh closed her lab for three days to work exclusively on the Hitler project.

"We used the same routines and controls that would have been used in a crime lab," she said. To her surprise, a small amount of viable DNA was extracted.

"We were very lucky to get a reading, despite the limited amount of genetic information," the scientist said. “That’s how we found out that the fragment belongs to a female.”

The story of the Nazi leader’s death is still a mystery. Some scientists initially had doubts about his suicide and believed it was Nazi’s propaganda created to present his suicide in a suitably heroic light.

Abel Basti, an Argentinean writer, was one of the first people to believe that the jaw fragment must be DNA-tested.

Abel Basti is the author of the book Hitler in Argentina that describes his theory of Hitler’s escape based on the real documents and photographs from archives. The writer believes that Hitler managed to escape to South America and live a long life.

In his book Basti states that on April 29, 1945 the Nazi leader was flown from Berlin to Spain on a Messerschmitt Me 262. From Spain, accompanied by Eva Braun, he went to Argentina by a submarine.

Russia Today: Did Lenin and Hitler face off at a chess board