Russia and Belarus Satisfied with Showing Their Claws

The West-2009 operative strategic army exercise held between Russia and Belarus finished on September 29. About 6,500 Belarusian and 6,000 Russian military men took part in the maneuvers. 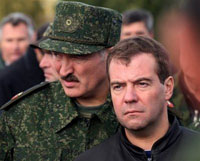 Russia and Belarus Satisfied with Showing Their Claws

Officials representing defense ministries of the two countries stated that it was purely a defensive exercise. Russia’s Dmitry Medvedev said at the meeting with the military men in the Kaliningrad region that Russia was not threatening anyone.

“The Armed Forced must not be disassembled like it was before. They must be operative,” the president said.

The drills were held to check the ability of Russia and Belarus in maintaining security of the Unified State and demonstrate the preparedness to repulsing a possible attack from the outside.

Military observers from all neighboring states - Lithuania, Latvia, Poland and Ukraine – attended the event. Officials from other countries having their diplomatic missions in Minsk (the capital of Belarus), EU and NATO members, first and foremost, were present at the exercise too.

The event was held against the background of a complicated political situation. Belarus has not taken the chairmanship at the Collective Security Treaty, which incorporates Russia, Armenia, Kazakhstan, Kyrgyzstan, Tajikistan and Uzbekistan. In addition, Belarus has not signed the agreement about the establishment of rapid response forces within the framework of the treaty.

Some journalists and experts believe that it was a vestige of a serious crisis in the relations between Russia and Belarus. They also said that the Belarusian administration was taking a number of steps to develop cooperation with the EU, which was another sign of its cold relations with Russia.

However, the communication between Dmitry Medvedev and Alexander Lukashenko during West-2009 showed that the rumors were exaggerated.

As soon as the exercise ended, the two presidents and their delegations went to the 61st air base of the Belarusian Armed Forces, where they examined the military hardware engaged in the drills.

It was the largest Russian-Belarusian military exercise that was held in the former Soviet republic, official spokespeople for the Defense Ministry of Belarus said.

Alexander Fadeyev, a senior expert with the Institute for the CIS and the Baltic States, said in an interview with Pravda.Ru that there was nothing surprising about the fact that the exercise took place.

“Yes, Belarus has been moving towards the West lately. However, it does not contradict to the nation’s course to balance between Russia and the European Union.

“Besides, Belarus does not have any guarantees from the West as far as the defense field is concerned. The nation relies on Russia’s adequate guarantees instead. The army of Belarus is outdated. It still has the weapons made during the 1970s and the 1980s. The Belarusian administration took efforts to calm NATO countries down and show them that the drills would be held to train the defensive abilities of the two brotherly nations,” the expert said.