Despite being the party with most votes, the Socialist Party (which is socialist only in name, defending in fact right-wing policies and acting with an autocratic arrogance which has alienated the hearts and minds of the majority of the Portuguese voters) saw its leader, the Prime Minister Jose Socrates, punished in Sunday’s general election, losing its overall majority which he asked to retain. 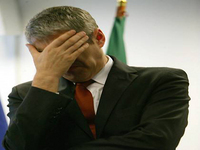 This result is a clear sign that the Portuguese electorate has decided to punish the PS, after four years of arrogance and political intimidation, while not trusting the PPD/PSD after decades of alternating governments with the PS produced nothing other than falling socio-economic indicators for Portugal despite rivers of money flowing in from the EU. Simultaneously, the CDU (Communists and Greens) increased the vote slightly, the Left Block increased substantially and the sensationalist Paulo Portas’ CDS/PP managed to attract the type of voter who is sensitive to a sensationalist campaign.

Prediction: More of the same. More unemployment, more university graduates flooding abroad, more business for language schools training students to get as far away from Portugal as possible as fast as they can before the country hits rock bottom 27th place out of 27 in the EU ranking.

Let us guess what Jose Socrates will say in his speech tomorrow: “We ask the Portuguese people to make sacrifices” which is what his party and the PPD/PSD has been saying for 25 years. In exchange for what?