The situation in the Caucuses is again the center of the world media attention. According to the Resonance, a Georgian newspaper, American military bases may appear in Georgia in 2015. The information allegedly came from an undisclosed high-ranking well-informed Georgian source. 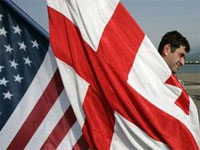 The newspaper believes that Georgian President Mikhail Saakashvili could have received this promise at the meeting with US State Secretary Hilary Clinton on September 21. The Pentagon is reportedly working on the project plans.

The issue of locating military bases in Georgia is supervised by several Republican congressmen. In Pentagon the issue is lobbied by the ex-vice president Dick Cheney. The document may be brought to the Congress for consideration.

If US congressmen approve the plan and Georgian officials support it, by 2015 there will be 25,000 American military officers in Georgia. As for the military bases, the US will build two land bases and one navy base on the territory of Georgia. The same number of bases Russia is building in Abkhazia and South Ossetia.

There were no official comments either from Washington or from Tbilisi. Analysts believe that the issue with American bases in Georgia is connected with harsh comments from US State Secretary Hilary Clinton

On September 21 (after the meeting with Mikhail Saakashvili) she said that the United States was not going to recognize independence of Abkhazia and South Ossetia. Washington will do everything to prevent the world from recognizing these republics.

“She mentioned that we believe that the best way to achieve our common (with Georgia – ed.) goal is not to have Abkhazia and South Ossetia recognized by other countries, but recognize that they belong to Georgia,” said Philip Gordon, the US Assistant Secretary for European and Eurasian Affairs.

“Despite Russian pressure, 99 percent of the international community did not recognize their independence. And we are working together with our Georgian friends to prevent it,” he added.

It is not ruled out that “work with friends” implies a war component.

“The USA has been helping Georgia in military respect for the past four years. It involved not only regular supply of military equipment and preparing staff for the Georgian Army,” said Anatoly Tsyganok, an expert with the Institute for Political and Military Analysis.

“For example, during the 2008 campaign the Russian military captured an American control station. Even now at least 200 American soldiers are located in Georgia.

“I do not think that Washington will majorly expand its military aid to Tbilisi. And it will not locate American military bases there. The most it can do is to use Georgian Air Force to supply its Afghan group.

“Locating military bases on Georgian territory is doubtful due to several reasons. First, the situation in Georgia is too unstable for such a risky plan. Second, the US cannot disregard the fact that Russia and Turkey are not happy with the American presence in the Black Sea basin.

“Third, in the event of an armed conflict with Russia, American military bases would be too vulnerable against Russian attacks, including the attacks of tactical missile systems like Iskander. Most likely, it was only an intention. In reality, locating US military bases in Georgia can take from 10 to 12 years,” said Tsyganok.

Anatoly Utkin, deputy head of the USA and Canada Research Institute stated in an interview with Pravda.Ru that he does not eliminate the idea of the USA’s participation in the fate of the Georgian Army.

“Clinton’s statement means that the USA has no intention to leave Georgia to the mercy of fate, that the US will help to re-arm the Georgian army.

The post-war situation in South Ossetia is not good as it is. Russia stepped on a mine field with its actions in the Caucasus last year. Speaking about the recognition of South Ossetia and Abkhazia, we appeal to the Kosovo precedent that was created by the West. But other countries are not yet effected by this reasoning,” the expert stated.