Iranian President Mahmoud Ahmadinejad is proud of the reaction from Western countries to his recent speech in which the notorious politician called doubts on the Holocaust. 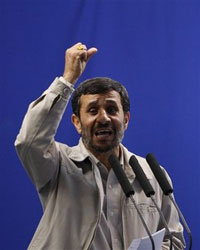 "They (the Western powers) launched the myth of the Holocaust. They lied, they put on a show and then they support the Jews.

"If as you claim the Holocaust is true, why can a study not be allowed?" he said to chants of "Death to Israel" from the crowd gathered for the annual display of solidarity with the Palestinians.

"The pretext for establishing the Zionist regime is a lie... a lie which relies on an unreliable claim, a mythical claim, and the occupation of Palestine has nothing to do with the Holocaust," he added.

"This claim is corrupt and the pretext is corrupt. This (the Israeli) regime's days are numbered and it is on its way to collapse. This regime is dying."

"Such statements, wherever they come from, contradict the truth and are totally unacceptable," an official spokesman for Russia’s Foreign Ministry Andrei Nesterenko said in a statement.

“Attempts to rewrite history, especially as the 70th anniversary of the start of World War II is being marked this year, are an offence to the memory of all victims and all those who fought fascism," he added.

Nesterenko said Ahmadinejad's comment "does not contribute to creating an international atmosphere that would foster a fruitful dialogue on issues concerning Iran,” AFP reports.

However, Ahmadinejad was not confused about the reaction from the world.

"The anger of the world's professional killers is (a source of) pride for us," Ahmadinejad was quoted as saying by the official IRNA news agency.

Ahmadinejad intensified Iran’s anti-Israeli politics after he came to power in the country. He is known for anti-Israeli remarks: “Israel should be wiped off the face of earth,” “The Holocaust was a pretext to occupy Palestinian land,” “Israel runs the policies of racism, fascism and apartheid.”