Western Sahara: Who will take a stand against Morocco?

Morocco: illegal annexation of Western Sahara, repression of the Saharawi people, allegations of abduction, torture, disappearance of over 500 human rights activists. Morocco continues to refuse to hold a referendum on the country’s status and commits human rights outrages by the day, while the rest of the world turns a blind eye. 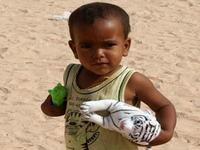 Western Sahara: Who will take a stand against Morocco?

Morocco has refused to live up to its promise and has repeatedly blocked and stalled, while it tightens its grip on the country it invaded – against every fibre of international law - and over 165.000 Saharawi refugees are forced to brave the inhospitable Algerian desert where they live in exile.

The latest alleged human rights abuse to be uncovered was the alleged abduction of a 19-year-old girl by Moroccan security agents, just because she planned to attend a human rights conference in Oxford. The girl was allegedly stripped naked and threatened with rape and being killed if she did not cease her human rights activities.

More and more of these stories are getting out of Western Sahara and have been documented by a growing army of Internet bloggers, many of them students fighting the Moroccan oppression. Konstantina Isidoros, a Ph.D. student at Oxford, working with human rights organizations, has compiled a list of resources documenting Morocco’s crimes (see below).

And where is this story in the international press? What is the reaction of the leaders of the international community? At best any questions asked are rebuffed with a diplomatic version of “no comment” (i.e. turn away and pretend the question does not exist).

By publicising the human rights abuses committed by Morocco and by taking up the cause of the Saharawi people, this question can become part of a political agenda. It is totally unacceptable that the rights of an entire people are violated in this way and it is up to the international community to do something about it. Every day that passes without action is an insult to the notion that mankind stands for decency or that we have common values which we must all aspire to.

We may start by questioning those we elected to represent us, what is their position on Western Sahara, what exactly they plan to do about it and what is the timetabled agenda for their actions.