September 11 Attacks: The Greatest Fraud of the 21st Century

September 11, 2009 marks eight years since the day of tremendous terrorist attacks in the United States. The tragic events still raise many questions. Why did the twin towers collapse if they were built to stand a much stronger blow? How did some of the “suicide bombers” remain alive afterwards? Where is the clear footage of the plane crashing on the Pentagon? 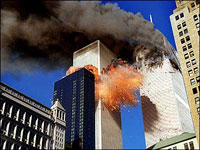 September 11 Attacks: The Greatest Fraud of the 21st Century

2,973 people were killed in the series of terrorist attacks in New York and Washington on September 11, 2001. Two twin towers of the World Trade Center in New York City tumbled down as a result of the attacks. A part of the Pentagon building was demolished in Washington.

The WTC used to be a symbol of power of the United States during the end of the 20th century. The towers were built in the beginning of the 1960s to show something grand to Americans and make them feel proud of their nation.

The towers were built instead of 164 buildings that were standing on the location of the would-be giants. The total weight of steel, which was used in the construction of the towers, exceeded 200,000 tons. Electric cables used for the buildings had the length of 3,000 miles, which is a half of the distance between New York and London. As a result, two 110-storeyed 450-meter high monsters changed NY’s skyline for good, as everyone believed.

The buildings were opened on April 4, 1973. They could live for ages, but they collapsed in 28 years. The questions, which many people have in this connection, still have no answers.

How could huge steel columns smelt because of the kerosene, the burning point of which is four times as low as the smelting point of steel? About a dozen of cargo planes loaded with white phosphorous should have slammed into each of the two towers to make them collapse like a house of cards. Or the buildings should have been previously mined.

There are plenty of versions to explain what really happened in the USA on September 11, 2001. Newsweek wrote on September 16, 2001 that five of 19 hijackers had been trained at US army bases. Three terrorists had driver licenses and technical passports of the vehicles registered at the US naval base in Pensacola.

The mysterious details of the terrorist acts set off speculation about the possible participation of US top officials in the attacks, who used them to reach their political goals.

If it is true it only means that US strategists had not thought of anything new. Roman Emperor Nero set Rome on fire to blame Christians for that. Hitler set Reichstag ablaze to lay the blame for it on his adversaries.

The USA resorted to a number of political provocations in its history before. In 1898, the Americans imitated a Spanish attack on the United States in Havana to deprive Spain of its control over Cuba. In 1911, Hurst, a media mogul and newspaper tycoon, who could lose his land in Mexico, launched a propaganda campaign to make the USA declare war on Mexico. Many of his newspapers wrote that hundreds of thousands of Mexican soldiers were approaching the US borders.

The US administration was informed about Japan’s attack on Pearl Harbor, but did not take any measures to prevent it. The people were strongly against the USA’s participation in WWII, whereas the government was eager to play the game of war to enjoy the redivision of the world afterwards. All aircraft-carriers had left Pearl Harbor shortly before the attack, but left outdated battleships there.

Another provocation was made a year later with a view to have Canada involved in the war. It was said that a Japanese submarine supposedly attacked a lighthouse near Vancouver on June 20, 1942. There is every reason to believe that Japan would not have taken such a great risk because of such an insignificant object. It was later said that the type of shells that were used to attack the lighthouse could not be fired from Japanese submarines.

US special services made a global presentation of the complete list of terrorists and their photos several hours after the 9/11 attacks. However, five “deceased” terrorists suddenly emerged in Saudi Arabia. They did not leave the country nor did they hijack the passenger jetliners. Does it mean that the list had been prepared before the attacks?

What about the crash of the Boeing in Pennsylvania? The crater on the site of the plane crash was filled with tiny fragments only. Even if the plane was carrying a cargo of hexogen, the hull would not have been turned into dust.

And here comes the most surprising fact. Condoleezza Rice, who was taking the post of the National Security Advisor at that time, was on the phone with San Francisco Mayor Willie Brown eight years before the tragedy. Ms. Rice recommended the mayor not to fly to New York on September 11th.

Britain’s The Times wrote after the tragedy that George W. Bush let a private plane from Saudi Arabia cross the US territory to pick up about a dozen of Osama bin Laden’s relatives and take them out of the country.

None of Bin Laden’s relatives were summoned to appear at the FBI. There was not even an attempt made to find out if they had any information.

Will the mysteries of 9/11 ever be unraveled?