British economists from Capital Economics said as a result of a recent research that the Russian ruble was expected to lose about ten percent of its value against the dollar. Russian analysts share such a conclusion and say that there is nothing terrible about it. The United Nations Organization in its turn published a new research in which it criticized the dollar as an international currency and offered to replace with an artificial one. 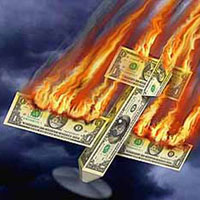 The report from the UN conference on Trade and Development particularly stated that the global currency system was not efficient. The system, the report said, hampers the development of the world economy and serves one of the reasons for the current economic crisis.

One of the authors of the report said that replacing the dollar with an artificial currency could solve a number of problems connected with the state debt and the imbalance in the field of international trade.

"A viable solution to the exchange-rate problem would be a system of managed flexible exchange rates targeting a rate that is consistent with a sustainable current-account position, which is preferable to any 'corner solution.' But since the exchange rate is a variable that involves more than one currency, there is a much better chance of achieving a stable pattern of exchange rates in a multilaterally agreed framework for exchange-rate management," said the U.N. body.

“This subject is not new at all, but I do not think that this problem will be paid any attention to during the upcoming several years. The crisis of trust and the crisis of finance is enough for the economy today, no one needs a currency crisis. One needs to look into current problems and not create new ones,” finance expert Alexander Osin told the Noviye Izvestia newspaper.

However, a new currency has all chances to emerge some day, the expert said.

The subject of the dollar’s replacement surfaced for the first time in November of 2008, during the G20 summit in Washington. It was Russia and China that offered the issue for discussion. China support Russia, but other members of the summit decided to take a break without setting forth any objections, though.