The scandal connected with the investigation of CIA’s tortures of terrorist suspects has been gathering pace in the United States. CIA officials said September 2 that they would not publicize more details of methods of tortures used against terrorist suspects at CIA prisons. 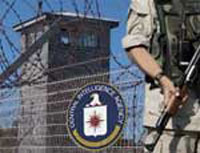 An official spokesman for the Central Intelligence Agency said that it could not turn over more details of its interrogation procedures without spilling classified government secrets.

USA’s Justice Department released a report on August 24 which shed new light on the methods, which CIA agents used during interrogation of terrorist suspects. Not only did interrogators threaten to kill suspects, but they threatened to rape their mothers in front of them if they refused to answer questions.

CNN said that agents imitated the execution of a man suspected of the explosion of the USS Cole in 2000: they blindfolded him and imitated execution by shooting with the help of the sound of a drill. Newsweek wrote about imitations of executions by drowning and keeping prisoners in tiny cells where it was hardly possible for a human being to make a move.

The goal of all those tortures was the same – to make the suspects give the required testimony. The Justice Department did not appreciate the efforts and filed investigation into the matter.

Obama’s administration released its own statement on August 24. The statement was about the establishment of a new special department on interrogations of terrorist suspects. It is worthy of note that President Obama said in the winter of 2009 that all officials of the Justice Department, who recognized tortures a normal method of interrogation, would be called into criminal account.

The CIA eventually declassified a certain amount of information about tortures last week. The agency was supposed to provide more information on August 31, but it did not happen.

The story with CIA’s secret prisons located in many countries of the world has caused serious damage to the USA’s image abroad and ruined the reputation of George Bush’s administration inside the country. No country of the world has ever claimed responsibility for establishing secret CIA prisons on their territories.

The story is definitely not going to fade away. If it happens, everyone will think of Obama and many officials at his administration as officials who did not keep promises to their electors.

Viktor Kremenyuk, the deputy director of the Institute of the USA and Canada of the Russian Academy of Sciences, said in an interview with Pravda.Ru that Obama and his team simply wanted to establish law and order in the country as they take a closer look at the CIA’s treatment of terrorist suspects.

“They need to find out, who gave recommendations on tortures, who executed them and how the system worked on the whole. They need to look into the activities of the nation’s law-enforcement agencies. It is about time the USA should do something about the law-enforcement system of the United States, especially when it comes to the CIA, because the people, who started working at the CIA during Bush’s presidency, still have their jobs. The new administration obviously wants to get rid of those people. The most important aspect of this story is the reorganization of the state machine and the law-enforcement system as its part,” the expert said.

As for the USA’s image abroad, Obama does not seem to be thinking much about that. If he brings the issue of CIA tortures to its end, the image of the nation will improve itself internationally.