A “funny” incident took place with Georgian President Mikhail Saakashvili on Sunday near the border with the Republic of Abkhazia. An unidentified person threw a shoe at the president as he was visiting a resort settlement. The shoe hit Saakashvili in the head. The incident took place during a TV interview on the beach of the village of Ganmukhuri, Interfax news agency reports with reference to The Alia, a Georgian newspaper. Officials with the Georgian administration rejected the information which originally appeared in the newspaper. 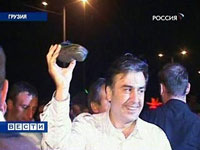 An unidentified person threw a shoe at the Georgian president and started running away from the scene of his “crime.” Technically, the whole incident was filmed since it happened during a TV interview with the president, but the footage of the incident was not broadcast.

Some Georgian TV channels, Rustavi 2, for example, skipped through official reports about the president’s work visit. Instead, the channels showed Saakashvili meeting young people at a local dance party. The footage was showing the people chanting : “ Misha ! Misha !” However, the newspaper wrote, many were calling the Georgian president disgusting names, although the viewers did not hear or see that.

Mikhail Saakashvili said in the interview that the village of Ganmukhuri would become the most attractive resort for tourists from all over Europe.

Official spokespeople for Saakashvili’s administration subsequently rejected the information about the thrown shoe.

“I was there myself and did not see anything like that happening there,” an official told RIA Novosti news agency.

The agency also cited a piece of the article which appeared in the above-mentioned Georgian newspaper.

“They threw a shoe at Saakashvili at the moment when he was giving an interview to TV reporters squatting down on the dance floor. All cameras were working at that moment. Someone approached, removed a shoe and threw it at Misha. The shoe hit him in the forehead,” the article said.

The president’s security started following the escaping shoe-thrower immediately. They eventually caught the man and pushed him into a police vehicle.

It is worthy of note that Russian online media have been collecting the incidents of confusing situation with Georgian President Mikhail Saakashvili. Life.ru website, for instance, has recently uploaded a video of Saakashvili’s bizarre, almost hysterical laughter. The video clearly shows that Mr. Saakashvili obviously needs to have his head examined. The bizarre laughter video became an addition to other well-known videos in which the Georgian president was eating his tie or running away in fear from a non-existent attack.

Russia’s Vzglyad newspaper wrote that the man, who threw his shoe at Saakashvili, had been brutally beaten. Local residents from the village of Ganmukhuri said that the shoe-thrower was a 30-year-old man, who did not reside in the village. The thrower has not been identified as of yet, the newspaper said.

Also read: Saakashvili did something very stupid and wicked in attacking Tskhinvali