Cynthia McKinney: Did The FBI Pay a "Journalist" in 2006 to Say That I Should Be Lynched on My Way to Vote?

I am in the Bay Area and rocking with the San Francisco Bay View newspaper. But something quite insidious is happening and I think you should know immediately how it involves my friends and me. 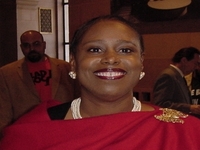 Cynthia McKinney: Did The FBI Pay a "Journalist" in 2006 to Say That I Should Be Lynched on My Way to Vote?

Hot on the heels of my learning that the Georgia Green Party might have been described by the U.S. Government as a "terrorist organiztion," it has just now come to my attention that a "journalist" who suggested that I be lynched was actually being paid by our own government to say that. Now, when I reported it to the FBI, how in the world was I to know that he was at that time on the FBI's payroll? Interesting that charges stem from his comments against Connecticut lawmakers and Illinois judges, but not from the threat made against me, a sitting Member of Congress at the time! I wonder why. To whom can I or any other innocent citizen turn when the government, itself, is the instigator?

John Judge, my Congressional staffer, is the one who reported the threat. Here is what John just wrote, along with the article that reports that Turner was on the FBI payroll at the time the threat was made against me, according to Turner's attorney. See the green highlights below:

John Judge wrote:
This is the guy who announced a program topic suggesting that Cynthia McKinney be lynched on her way to the polls to vote in 2006 and published her campaign office address on the website. He asked how she would look swinging at the end of a rope and what message it would send to other "uppity" Blacks. I called NJ Homeland Security and FBI at the time sincee related to it as a death threat. The FBI agent I spoke to said "We know all about Mr. Turner". Looks like they did. Now they say he was trained as an agent provocateur by the FBI to get others to participate in illegal acts. As Jim Garrison says in the movie JFK after interviewing Clay Shaw, "I think we got one".

Here is an excerpt _ JJ

"Prosecutors have acknowledged that Turner was an informant who spied on radical right-wing organizations, but the defense has said Turner was not working for the FBI when he allegedly made threats against Connecticut legislators and wrote that three federal judges in Illinois deserved to die.

"*But if you compare anything that he did say when he was operating, there was no difference. No difference whatsoever,*" Orozco said."

Harold Charles "Hal" Turner is an American white nationalist and white supremacist from North Bergen, New Jersey. He was arrested in June 2009 over alleged threats to politicians, and is currently jailed without bail. Prior to Turner's arrest his program, The Hal Turner Show, was a webcast from his home once a week, and it depended on listener donations.

Turner promotes antisemitism (including the rounding up and killing of Jews, he opposes the existence of the state of Israel and he denies the Holocaust.