Ukraine's Viktor Yushchenko: 'I Am The State'

The Russians and Ukrainians continue to discuss the addresses of their presidents, Dmitry Medvedev and Viktor Yushchenko, to each other. 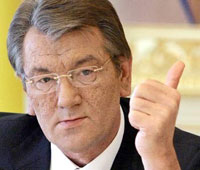 Ukraine's Viktor Yushchenko: 'I Am The State'

In January of the next year the presidential elections will take place in Ukraine. Very few people doubt that Viktor Yushchenko has no chances for reelection. However, about one month and a half ago he announced his intention to take part in the presidential election. Yushchenko seems not to realize the realities. The controversy between him and Dmitry Medvedev confirms it once again.

The Russian president found it necessary to stress out a huge difference between the desires and aspirations of the Russian and Ukrainian peoples and the position of the outgoing President Viktor Yushchenko. Not only did he fail to reduce the gap between different regions of Ukraine and reconcile the society excited by the Orange Revolution during his presidency, but on the contrary, he did his best to deepen this gap. The same happened with the relations between Russia and Ukraine.

Dmitry Medvedev outlined those claims to the Russian-Ukrainian relations, which the Russian authorities and Russia on the whole have. Medvedev addressed his letter personally to the Ukrainian president. After some bewilderment Viktor Yushchenko responded.

The response looked like the explanation of every accusation presented. However, Yushchenko attempted to present the facts as if the claims do not concern him personally but Ukraine as an independent nation on the whole. Yushchenko responded like Louis XIV of France, who believed that he personified the state and the people (“I am the state”). The second fact, that strikes the eye, is the substitution of theses and demonstrative struggle against the fictitious Russian claims.

Dmitry Medvedev made a pause and refrained from sending the new Russian ambassador to Ukraine in order to avoid speculation on the topic of the Russian-Ukrainian relations during the presentation of credentials and again - on the eve of the presidential election - not to deceive the electorate by the appearance of good relations between the two countries.

Medvedev's message has accomplished a serious task. The present Ukrainian authorities unwilling to resign would prefer not so acute topics to be discussed in the society. Russian politicians doubt that the Russian ambassador will start working in Ukraine before the presidential election. They have found out during Yushchenko’s presidency that it is impossible to come to an agreement with him.