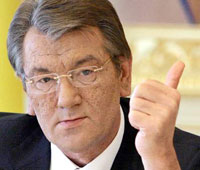 The new stage in the relations between Kiev and Moscow began on Tuesday, August 11, when the Russian leader set out his concerns about the worsening of relations between the two countries and ordered to postpone the arrival of Russia’s Ambassador to Kiev.

A spokeswoman for Yushchenko’s administration, Vera Ulyanova, responded to Medvedev’s message Wednesday and shifted the blame from the president to the whole nation.

When Mr. Yushchenko finally took courage to stand out and say something in his defense, he, like his subordinates, also tried to shuffle off responsibility on his Russian counterpart.

“I do agree that there are serious problems in the relations between our countries, but I am surprised that the Russian president completely excluded Russia’s responsibility for that,” Yushchenko said.

“Ukraine’s position regarding last year’s events in Georgia coincides with the positions of practically all countries of the world. This position is about the respect of sovereignty and territorial integrity of the state of Georgia, as well as any other sovereign state. The accusations of arms shipments to Georgia are groundless. In spite of Ukraine’s numerous and clear explanations of its legal activities on the arms market, Russia continues to run the campaign to portray Ukraine as the country that does not observe international rules and regulations in the field of defense cooperation.

“The Black Sea Navy regularly violates bilateral agreements and the Ukrainian law. There are serious problems in the implementation of basic agreements on the part of the Russian side as far as the issues of land, real estate, radio frequencies and navigation equipment are concerned.

“As for the visit of the Patriarch of Moscow and All Russia Kirill to Ukraine, one has to emphasize that he expressed gratitude for the high level of organization of his stay in Ukraine. The head of the Russian Orthodox Church did not make any negative or critical estimations, which you mentioned in your message. The Ukrainian administration respects the traditions of churches and religious organizations. The Church in Ukraine is separated from the state – every citizen is entitled to practice any religion. At the same time, no one can forbid citizens from expressing their positions on any questions, including religious ones,” Yushchenko wrote in his letter.

Sergey Markov, a scientist of politics, said that the Ukrainian president had failed to find good arguments to respond to Medvedev’s message.

“The theses in Medvedev’s message hit the bull’s eye. Yushchenko’s response was only a formal statement. Ukraine is going to declare another Nazi criminal a national hero, to intensify provocations against the Black Sea Navy, to strike a stronger blow on the Russian language and to do everything possible to make the Russians and the Ukrainians kill each other,” the specialist said.

In the meantime, Russia’s Medvedev signed the decree to appoint Mikhail Zurabov as Ambassador Extraordinary and Plenipotentiary to Ukraine. However, it does not mean that Zurabov will go to Kiev immediately.