Japan To Have Nuclear Weapons 64 Years After Hiroshima? 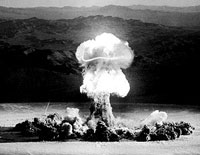 Japan To Have Nuclear Weapons 64 Years After Hiroshima?

About 200,000 people were killed, went missing, or died of radiation exposure as a result of the bombing. All buildings and constructions were leveled on the territory of 12 kilometers from the epicenter of the explosion.

Another bomb, Fat Man, exploded two days later, on August 9, in Nagasaki. About 74,000 people were killed in the explosion.

The first international conference to ban nuclear weapons took place in Hiroshima on August 6, 1955. A huge territory in the center of the city was used as an illustration of a nuclear disaster.

However, Vladimir Anokhin, the Vice President of the Academy of Geopolitical Problems, said in an interview with Pravda.Ru that Japan’s intentions were not as peaceful as one may think they were.

“The subject of the nuclear disarmament is the most important aspect of Japan’s foreign politics. However, the Japanese administration simply exploits the subject for its own interests. Japan may have nuclear weapons in the nearest future already.

“They keep talking about North Korea’s nuclear threat in Japan. The nation may sense danger coming from Iran, Pakistan and India. Finally, Japan is in territorial disputes with Russia and China – two nuclear superpowers. Therefore, the nation can easily substantiate the need to build its own A-bombs,” the expert said.

“Technically, the country can build nuclear weapons very quickly. There are many nuclear electric power plants in the nation, so it has all necessary technologies. It is worthy of note that Japan, like Israel, can officially deny the possession of nuclear weapons,” Mr. Anokhin concluded.

Another Russian expert, Viktor Pavlyatenko, believes that the situation is far from being that dramatic.

“Building nuclear weapons to struggle against North Korea is nonsense. The whole international community will be liquidating this threat, if it ever appears. However, Japan has been discussing the issue of building its nuclear weapons for 40 years already. The county has technological and financial possibilities for that, but it will be very hard to explain everything to the people who survived the nuclear bombing of Hiroshima and Nagasaki, not to mention the fact that other countries will not approve the nuclear initiative.

“Many in Russia are concerned about the growth of defense spending in Japan. Indeed, the nation tends to revise the post-war Constitution of 1947, which does not allow a full-fledged army. The Japanese Defense Department has already become a ministry . The country is also going to modernize its aviation and intends to purchase fifth-generation F-22 Raptor jets from the USA.

“However, Japan’s defense spending does not exceed one percent of its budget. As for the rearmament, all other countries practice that, and Japan is not an exception. The world is changing, the character of threats is changing too, and Japan has a right to react adequately,” the expert said.