Russia To Punish Those Guilty of Genocide in South Ossetia

Georgian troops committed criminal acts of looting and vandalism. They desecrated burial grounds and used unjustifiable violence against prisoners of war. These are not all crimes, which Georgia committed a year ago as it attacked Tskhinvali, the capital of South Ossetia. 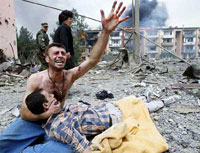 Russia To Punish Those Guilty of Genocide in South Ossetia

Today, Russia’s Investigation Committee exposed the list of crimes, which the Georgian Army committed in August 2008. According to the report, 655 houses were completely demolished and burnt. Over 33,000 South Ossetians - many of them elderly people, women and children - were forced to flee their homes.

Georgian troops used internationally banned cluster bombs and 500-kilo air-delivered bombs against civilians. Medical institutions of the city, houses and churches were shelled from all types of military hardware, including Grad volley-fire systems. Georgian snipers were attacking columns of refugees as they were trying to flee from the battlefield.

The collected evidence proves that Georgia attacked South Ossetia with a view to exterminate the Ossetian population, the report from the Russia Investigation Committee said.

The committee intends to complete the investigation of the criminal case and do everything to punish those who killed Russian military men and civilians last summer.

The prelude to the conflict began with violent clashes on Wednesday, 6 August 2008 with both sides claiming having been fired upon by the other. On 7 August, Georgian and Ossetian forces agreed on a ceasefire.

However, in the first hours of 8 August 2008, Georgia launched a massive attack, which started the 2008 South Ossetia war. After a prolonged artillery onslaught, Georgian troops with tanks and air support entered South Ossetian-controlled territory. On the same day, twelve Russian peacekeepers were killed and nearly 150 injured.

Heavy fighting was reported in Tskhinvali for most of 8 August, with Georgian forces attempting to push Ossetians slowly from the city. The following day, Russia deployed forces into South Ossetia to remove Georgian forces from South Ossetia. Additionally, Russia targeted Georgia's military infrastructure to reduce Georgia's ability to conduct another incursion.

On 22 August, following a negotiated cease-fire between Georgia and Russia, Russia pulled its forces back to Russia and South Ossetia, leaving military contingents disbursed throughout various areas as observation and security posts.