India launched its first nuclear-powered submarine, Arihant. Built in cooperation with Russia, this submarine is quite unusual. By its military characteristics the sub is close to Russian state-of-art nuclear submarines. Unlike Russian submarines it can carry 12 Indian Sagarika missiles. 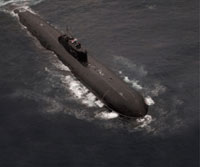 The missiles are capable of hitting targets at a range of 700 km. Thus this is the unique submarine armed with tactical ballistic missiles.

Pakistan expressed its concern about this event. Pakistani officials claimed that the launch of the submarine, which is supposed to undergo marine tests, would jeopardize security of the entire Indian Ocean region.

Arihant really looks menacing. The new submarine is armed with torpedoes and ballistic missiles and is equipped with the 85 megawatt nuclear reactors.

This is the first of five submarines to patrol seaways in the Indian Ocean. After the launch of Arihant India became the sixth country in the world to own nuclear submarines.

Thus Arihant is a sign of a strong resolution of India to play a significant military role in the world.

Despite all the historical antagonism between the countries and the new increase of tension on the subcontinent, the fears of Pakistan are groundless. Many military analysts say that the potential target for Arihant is China but not Pakistan.

The 700-kilometer range of the Indian missiles is enough to reach main PRC’s strategic sites. On the assumption of this experts presume that Arihant was built with a view to constrain China.

It is interesting that the dangerous competition actively develops when the relations between Delhi and Beijing became the closest after war in 1962. The turnover between the countries accounts for about $40 billion a year. The armies of the countries have recently held joint military drills too.

However, China was shocked, when India concluded a nuclear transaction with America last year.For the moment being, China demonstrates its potential in the Indian Ocean, reconstructing a small port of Hambantota at the southern end of Sri Lanka into a big deepwater transshipment point for container shipment between Europe and Asia.

This port will also become a state-of-the-art naval base between the Persian Gulf and Far East.

As a result, the peaceful Indian Ocean can become an arena for self-assertion of the developing Asian countries. Cold War is in the air.