Former Danish Prime Minister Anders Fogh Rasmussen has started working as NATO's new Secretary General. He was elected April 4 at the summit in Strasbourg, but according to the rules he was to take up the post in four months. 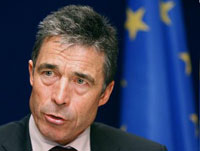 Rasmussen served as Prime Minister of Denmark from November 27, 2001 to April 5, 2009. His political career started as early as 1970 when he was the founder and chairman of the Young Liberals organization the city of Viborg. The Liberals organization helped him join the Danish Liberal Party Venstre.

His career was developing successfully afterwards. In Denmark, Rasmussen served as the minister for taxation, minister for economic affairs and finally the prime minister.

Rasmussen is a typical proponent of the liberal society model like that in the USA. That’s why during his ministry, Denmark was following the United States in terms of foreign politics.

Anders Fogh Rasmussen was preceded by social democrat Poul Nyrup Rasmussen and succeeded by the leader of the centre-right Liberal Party Lars Lokke Rasmussen. However, they are of no relation to each other. Thus, the Danish government has been headed by Rasmussens since 1993 till 2011.

Anders Fogh Rasmussen became known worldwide after two incidents. The first one affected Russia, when Chechen terrorists took hundreds of people hostage at the Moscow music theater in 2002. The Danish government allowed the World Chechen Congress to be held in Copenhagen soon afterwards. Akhmed Zakaev, the envoy of Chechen terrorists, was also present at that congress. Rasmussen denied making an apology to the Russian Federation.

The second incident proved to be even more global. In 2005, Jyllands-Posten, a Danish newspaper, published the cartoons portraying Prophet Muhammad as a terrorist. Muslims went on massive riots all over the world as a result of the publication.

Many Muslim countries asked for apologies from the Danish Prime Minister. But he barely explained that freedom of speech was a vital part of the Danish society and said the Danish government was not in a position to have any influence on what the press was printing.

During the election process in 2009, Turkey remained opposed to Rasmussen's candidacy because of the cartoons story. However, Turkey withdrew its opposition to Rasmussen's appointment.

The most influential NATO members supported Rasmussen. The USA and Great Britain voted for Rasmussen because he advocated the military operations in Iraq and Afghanistan. France, Germany and Italy supported his candidacy because had been speaking a lot about cooperation between NATO and the EU.