The informal summit of the Collective Security Treaty Organization (CSTO) took place in Kyrgyzstan. During the summit Kyrgyz President Kurmanbek Bakiyev and his Russian counterpart Dmitry Medvedev signed the agreement about the deployment of additional Russian military contingent in the Asian country. At the same time Moscow convinced Belarus to sign the agreement on creating Collective Rapid Response Forces within the framework of the organization in the nearest future. 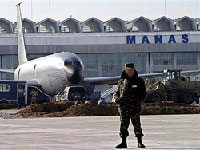 The results of the summit had surpassed all expectations, The Kommersant wrote.

Moscow managed to convince Bishkek to deploy a Russian military base in Kyrgyzstan, having reminded the nation of the two-billion-dollar loan, which Russia provided.

The Vedomosti newspaper gave a different estimation of the summit. Moscow reportedly expected to sign a full-fledged contract, but the Russian and Kyrgyz officials failed to coordinate the conditions on which the Russian army base would be established in Kyrgyzstan.

“All the questions concerning the geographic parameters of Russia's military presence and the financial aspect will be discussed in the course of the just-started negotiations,” said Russia's Foreign Minister Sergei Lavrov.

The new Russian military base will primarily be used by the CSTO Rapid Response Forces. The base will presumably be built near the southern city of Osh. The agreement for the deployment of the Russian military contingent the size of up to a battalion would operate for 49 years with a possible extension.

The agreement is expected to be concluded on November 1, 2009.

The Vedomosti newspaper suggested the base could be deployed in Batken. However, Russia wants to turn one of the existing military facilities with their infrastructure near the city of Osh into its base, while Kyrgyzstan wants the military base to be built from scratch using Russian money.

It is worthy of note that the United States Air Force has its air base at Manas International Airport, near the capital of Kyrgyzstan. In February, Bishkek announced plans to close the Manas base. The US should have left Manas by August 18, but in June Bishkek and Washington agreed to use the Manas airbase for the transit of troops and supplies to Afghanistan. Bishkek raises the rent that Washington pays for the use of the base, and the USA provides a considerable financial assistance to the nation.

Also read: Rapid response military base in Kyrgyzstan may be set up within days