A political scandal, capable to develop into a great conflict, burst out in South America. Venezuelan president Hugo Chavez, known for his anti-American sentiments, decided to freeze the relations with Columbia, a close US ally in the region. 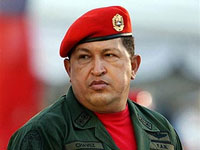 The latter was quoted as saying that the Swedish anti-tank weapons found their way to FARC rebels, the Revolutionary Armed Forces of Colombia. Venezuela supposedly bought those arms from Sweden during the 1980s.

Moreover, Columbia is worried by appearance radical Shiite movement Hezbollah in Venezuela and the government’s inaction regarding the issue of drug trafficking.

The Swedish government has already called on Caracas to explain how the Swedish weapons wound up in the hands of FARC, which is considered a terrorist organization in the EU and the USA.

In return Chavez called the Colombians “deceitful” and promised to cease diplomatic relations with this country.

The Venezuelan president also promised to stop the import of Columbian goods to his nation and nationalize all the companies belonging to Columbia. For the time being, Venezuela has only recalled its diplomats from Colombia and did not proceed with anything else.

Returning to the question of FARC weapons, Chavez alleged that the revolutionary organization received most of its weapons directly from Russia, the USA and Israel. Such a statement may ruin the relations with both the USA and Russia.

The accusation of Russia seems surprising as Chavez constantly calls Russia their ally. Venezuela has purchased a lot of Russian weapons recently: the signed contracts are evaluated at $4 billion

All those allegations sound menacing taking into consideration the fact that at the beginning of the previous year South America was on the verge of war. Now Chavez is accused of supporting Islamic radicals and illicit arms trade. Thus, the leading world-powers, including the USA and Russia, may find themselves involved in the conflict.

By the opinion of Russian military experts Chavez had the right to have such a harsh reaction to the accusations. He was unlikely to supply terrorist organizations with the weapons. Venezuela itself needs the arms to suppress major powers, presumably the USA. It is also doubtful that Hezbollah camps are located in Venezuela.

Experts hold an opinion that the USA tries to discredit Chavez and conducts an informational war against him in order to topple the stubborn Venezuelan president.

It goes without saying that the USA is not going to send troops to Venezuela. The USA acts indirectly through its ally. Military experts call it the indirect approach strategy.