Russia is no longer concerned about the remarks from US Vice President Joe Biden, who said that the Russian economy would be “withering.” The Kremlin believed US Secretary of State Hillary Clinton, who said that Washington considered Russia “a great power.” 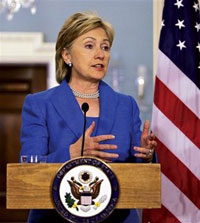 Joe Biden criticized Russia in his recent interview with The Wall Street Journal. The statements, which he released, produced an impression as if Moscow and Washington did not even intend to reset the relations between the two countries. Biden particularly stated that the economic crisis would gradually weaken Moscow, and Russia would eventually be forced to make serious concessions to the West.

It later turned out that the White House did not support Biden’s remarks. White House spokesman Robert Gibbs stated that the US administration was greatly interested in resetting the relations with Russia. Secretary of State Hillary Clinton said in her interview with the WSJ that every country faces its own problems.

The Secretary of State added that Washington had never considered itself the one in charge as far as the USA’s relations with Moscow were concerned.

Kremlin’s spokesman Sergei Prikhodko wondered after the publication of the controversial interview with Mr. Biden, who was shaping the US foreign policy – the president or the members of his team. Now it seems that the situation has been made clear, and Moscow tends to trust Clinton more than Biden.