Different points of view on the circumstances of WWII remain the key factor in tense relations between Russia and the Baltic States (Lithuania, Latvia and Estonia, former republics of the Soviet Union). Official spokespeople for Estonian Foreign Affairs Ministry referred to Russia’s criticism of former SS veterans’ meeting in Estonia as “propaganda based on meanness and lies.” 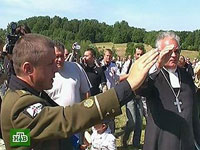 Russia’s Foreign Ministry said that the meeting of Waffen SS veterans in Estonia was a sacrilegious attempt to rehabilitate former SS officers and their associates under the pompous guise of pseudo-patriotism.

“Estonia continues to take blasphemous attempts to rehabilitate former SS officers calling them the “fighters for freedom” in Estonia. We are seriously concerned about another meeting of SS officers in Estonia,” Andrey Nesterenko, a spokesman for Russian’s Foreign Ministry said in a statement.

It is worthy of note that Latvia also celebrates the memory of the Latvian Waffen SS legion. The European community stands strongly against such meetings, which inevitably result in street riots and scuffles.

Estonian officials attended the meeting of SS veterans in the town of Sinimae – the place where the battles between Hitler’s army and Soviet troops were especially fierce. The officials welcomed the veterans of Nazi troops from Latvia, Lithuania, Austria, Denmark, Norway, Germany and Holland.

The Estonian police arrested five antifascist activists, who attempted to protest against the gathering of former SS officers. Two Latvian antifascists were deported from Estonia.

Russia harshly criticized Latvia and Estonia at the OSCE for their attempts to rewrite the history of Europe. Russia’s Ambassador at the OSCE Anvar Azimov stated that the two countries were glorifying the crimes of Nazism against humanity. Latvia annually supports its national partisans, many of whom used to serve at Wehrmacht and Waffen SS.

Latvian lawyer, Andris Grutups, has recently published a book titled “Scaffold” dedicated to the rehabilitation of the leaders of the fascist administration in Latvia. “The author ignored the fact that those officials were sentenced to death for military crimes in 1946,” Azimov said.

The lawyer sent hundreds of copies of his book to Latvian schools to use them as schoolbooks.

The Latvian authorities also unveiled a memorial board to honor former SS officers at a graveyard on the outskirts of Riga.

“It’s astonishing that deputies of the Latvian parliament and several officials of the nation’s political parties and Latvia’s deputy at the European Parliament were present at the ceremony. The president of the country sent a greeting telegram to them,” Anvar Azimov said.