The USA State Department does not exclude a possibility of supplying arms to Georgia, Philip Crowley, an official spokesperson for the State Department, stated as US Vice President Josef Biden paid his visit to Georgia. 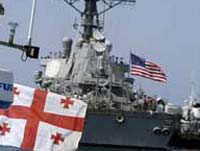 Crowley explained that "a fundamental tenet of NATO membership is to have a military that meets NATO standards and would add to the capability of the alliance." By the spokesperson’s opinion this decision will not affect the relations with Russia. "We will continue to have, I'm sure, conversations with Russia on these issues," he said.

During the visit to Georgia US Vice President Biden acknowledged that the United States was working on "maintaining" the Georgian military but said that the efforts were limited to planning, training and organizing the army.

Spokespeople for the Russian Foreign Ministry harshly criticized the decision of the United States to continue supplying military hardware to Georgia.

“Those, who continue speaking about the need to supply arms to Georgia, are making a big mistake,” Russian Foreign Affairs Minister Sergey Lavrov said.

Moscow's NATO envoy Dmitry Rogozin said that Russia would impose sanctions against the United States in case US firms deliver weapons to Georgia.

“A presidential decree has been issued stating that Russia will introduce sanctions against foreign companies that continue to militarize Georgia,” Rogozin reminded. "If it is proven that a producer - it is not important where, in the Arctic or in America - supplies offensive weapons, it will undoubtedly fall under the influence of this decree," Rogozin said.

Some analysts say that the above-mentioned remarks from a State Department official do not mean that the USA will ship its military hardware to Georgia. Besides, even if the USA does, the arms shipments will be absolutely legal, as no sanctions are imposed against Georgia.

South Ossetian Ambassador to Russia, Dmitry Medoyev, said that the statement from a US official should not be treated seriously. It would be strange to arm Georgia after the military conflict in August, 2008, the official said.

Experts claim that the USA and Georgia act within the framework of doctrinal documents, obliging the allies to provide support in military conflicts. The USA hardly supported Georgia during the war last summer, but now the nation tries to provide Georgia with arms in order to rehabilitate itself.

It is an open secret that Georgia mostly owns Soviet-made hardware. Therefore, it seems extremely difficult and even impossible that all of that equipment could be replaced with something different.

Taking into account the fact that the Georgian administration has its own style of perceiving statements from US officials, one may assume that Georgia may eventually be inspired to ruin relations with its neighboring states again.