From now on India will be buying American weapons. The USA and India came to such an agreement during Hillary Clinton’s visit to Delhi on July 20. India has been using Russian and Soviet weapons for 50 years. 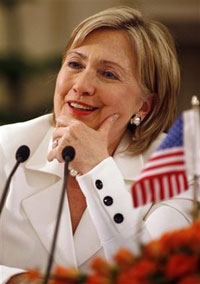 The relations between Russia and India, including those in the field of military and technical cooperation, have been worsening recently. India turned its attention to other partners and entered into transactions with Israel, France and other manufacturers of military hardware.

Now the USA, Russia’s major competitor in this sphere, completed this list.

Russian military analysts say that the principal reason for India’s decision to develop defense cooperation with the USA lies in Russia’s numerous violations in execution of contract terms with India. India was outraged when Russia delayed the modernization of the Admiral Gorshkov aircraft carrier, as Russia did previously with the delivery of warships and submarines.

Up to 50 percent of the rockets were reportedly defective. Therefore, the question of whether India continues to buy weapons from Russia remains open after the nation signed the defense cooperation agreement with the United States.

India will continue buying Russian tanks. However, it is going to co-operate with other suppliers in the sphere of operational aircraft and navy. Thus, Russia will lose its key position on the Indian arms market. For the time being, India is Russia’s second biggest customer.

The Russian defense complex is now unable to provide the production that would fully satisfy foreign customers, due to the loss of qualified personnel.

Another negative moment is that Russia has been purchasing navigation facilities, optical devices and avionics abroad for several years. The Russian military production is virtually ruined and military engineers have invented nothing new.

No wonder, that Russia has given way to its foreign competitors. China might be the next partner to refuse from Russian weapons.

Delhi has taken the decision at the time when the Indian government assigned $30 billion on the modernization of its armed forces.

Two American military contractors - Lockheed Martin и Boeing - compete for the Indian orders. The transaction may prove to be the biggest deal in the sphere of arms trade.