Israel and USA tested the Ballistic Missile Defense Systems Hetz in the Pacific Ocean. Missile Defense Agency director Lt.-Gen. Patrick J. O’Reilly reported that the aim was to test the Hetz ability to shoot down the missiles with a range of more than 1,000 km. 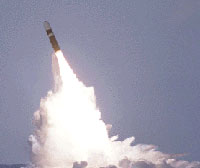 O’Reilly explained that Israel had designed the system to defend itself against possible ballistic missile attacks from Iran and Syria. The USA invested in the development of the system over one billion dollars.

Both parties concealed the location of the test, but military experts assumed that test flight was most likely held off the coast of central California. For this reason, civil aviation pilots were recommended not to fly in the area.

The latest test has turned a partial success, as for various reasons the military did not shoot down the target with a counter-missile. It was said that the failure occurred either over the fears of casualties in the densely populated territory or because of a technical malfunction.

However some military officials claimed that the test had been successful.

The history of Hetz or Arrow dates as early back as 1986. The system was designed by the Israeli company IAI. The USA joined the project in 1988. The first tests were performed by California coast in summer 2004: Hetz successfully downed a Scud missile.

The results of the following tests proved to be impressive: the system reached 13 targets of 15. However, the Israeli military decided to improve the new weapon. As the result, in 2008 the system shot down Ankor Shahor(Black Sparrow), a modernized version of Scud, which Iran and Syria have in their armed forces.

In April 2009, Hetz detected and shot down the Ankor Kahol (Blue Sparrow) missile designed by Israel to imitate the Iranian “Shihab”.

The recent tests in the USA showed that the system was in need of further development. Qassam and Katyusha rockets, which Lebanon and Palestine use to attack Israel, pose a much bigger threat: the system is unable to intercept them.

Nevertheless, the Israeli military held the first successful test of the anti-Qassam system “Iron Dome” on July 15. That means that the residents of the border area may hope that they will have a reliable protection against terrorist attacks.