Georgian President Mikhail Saakashvili acknowledged in his interview with The Wall Street Journal that Georgia’s chances to become a member of NATO and the European Union were almost dead. He also said that Georgia would not be able to retrieve South Ossetia and Abkhazia – the two republics, which Russia declared as independent after the armed conflict with Georgia. It is worthy of note that Saakashvili described the above-mentioned goals as “inevitable” prior to the conflict with Georgia. 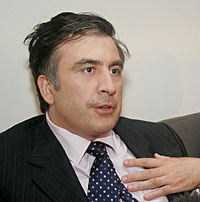 “It’s tragic. It means the Russians fought for the right reasons,” Saakashvili said.

“The president said the following: “If Russia cuts Georgia’s way to NATO, it will be tragic. It means that the Russians fought for the right reasons,” Bokeria said.

The WSJ also quoted a part of Saakashvili’s speech to the parliament of Georgia. Mr. Saakashvili said that Georgia would need to deepen democracy and conduct adequate elections after his presidency expired in 2013. Saakashvili promised that the Georgian opposition would have more seats in the parliament and would be more involved in governmental activities.

"It's all blah, blah, blah. He has promised things before and there have been no results," the WSJ quoted opposition leader Levan Gachechiladze as saying.

The Georgian opposition has been holding its actions of protest in the country since April 9 of this year, claiming that Georgia will be able to change only after Saakashvili steps down as the president.

“If we summarize the president’s promises, which he made since his re-election in January of 2008, we can make a whole book of his promises,” Pyotr Mamradze, the leader of a Georgian opposition party told Russia’s Vedomosti newspaper.

Mamradze added that Saakashvili decided to make such a speech on the threshold of Joe Biden’s visit to Georgia. The Georgian president claims that it is a coincidence, of course.

Biden is arriving in Tbilisi on Wednesday night visiting from Kiev, Ukraine. Official spokespeople for the US administration said that Biden would be visiting Georgia and Ukraine to demonstrate the USA’s friendly course to the two countries.

The Georgian opposition is getting ready for Biden’s visit to Georgia too. Opposition activists say that they will organize public actions of protest during Joe Biden’s stay in the Georgian capital.