The age of Saddam Hussein administration started thirty years ago. Saddam became one of the most terrible dictators of the twentieth century. Today everything related to him is prohibited in his country. However, not all the Iraqis can forget their previous president. 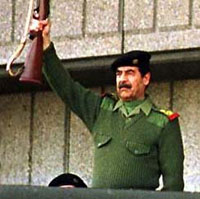 Saddam Hussein came to power in Iraq as a result of the coup on July 16, 1979. Saddam’s presidency started with arrests and executions of his party fellows. The wars with Iran and Kuwait, the genocide against the Iraqi Kurds and the Iraqi Shiites followed afterwards. Saddam’s unreasonable policy led to the international blockade of Iraq. Wars and UN Security Council sanctions turned a rich country into a ghost.

Crowds of Iraqis cheered the American military men during the capture of Baghdad in 2003 despite the fact that a couple of years before that the delighted Iraqis voted at parliamentary elections and expressed sincere affection to their president. Some do not conceal it even now, which makes the Iraqi government prohibit mass visits to Saddam’s grave.

Years of foreign occupation, new prisons, spontaneous arrests and tortures by American and British solders - all this made many Iraqis forget the events that were happening during Hussein’s stay at power. Never-ending terrorist acts in Iraqi cities, unemployment and poverty make many Iraqis fell nostalgic about the times of Saddam Hussein’s rule.

The Americans to set fire to a powder keg when they overthrew Saddam who was holding the conflicting Iraqi society in his hands. All the contradictions of the Iraqi society may come out now.

The Iraqis have honorably passed through the first commotions after the collapse of Hussein’s regime. Iraq was on the verge of guerilla warfare between different communities several times. Normal life comes back to Iraq slowly but surely despite endless conflicts within the government and the parliament.

It is impossible to forget that the US military presence was a strong constraining factor. Iraqi officials came back to the negotiating table to look for compromises under Washington’s pressure.

For the moment being, the Americans prefer not to interfere into internal affairs of the country.

The Iraqi government will have to prove the Iraqi people that the collapse of Saddam Hussein’s regime has not been futile. Should they succeed, the memory of the executed dictator will be the memory of the epoch of terror, but not the sweet nostalgia for the “iron hand”.