Russia strikes back to OSCE's comparison of Nazism and Stalinism 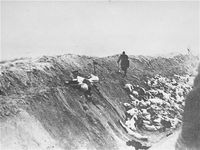 Russia strikes back to OSCE's comparison of Nazism and Stalinism

As far as Latvia is concerned, the Latvian Waffen SS Division was staffed by Latvian officers and troops, not Germans, and these carried out acts of almost indescribable cruelty in the concentration and extermination camps. Indeed, the Latvians began building concentration camps long before Hitler arrived on the scene – the Fascist dictator Karlis Ulmanis began building one in 1934.

The concentration and extermination camps in Latvia were not one or two. Apart from the infamous Mezaparks Camp at Kaiserwald near Riga, there were Daugavpils, Lenta, Liepaja, Strazdu Manor, Dundaga, Jelgava, Valmiera, Salaspils and Jumpravmuita. Between 70,000 and 85,000 Latvian Jews were exterminated in these camps, which counted on the willing collaboration and active participation of a substantial number of Latvians.

While the Soviet Union was losing 26 million men and women, the Latvian Schutzmannschaft (Shuma) exterminated Soviet p.o.w.s and Jews in concentration camps and fought for Hitler. Himmler (SS) and Heidrich (SD) created Latvian extermination groups comprising of between 70 and 150 murderers. In May 1941 they received orders to exterminate Jews (men, women and children), communists, Gypsies and “Asiatic half men”.

In the words of the OSCE document, genocide, human rights violations, war crimes and crimes against humanity.

Foto: Latvian security forces ordered Jews to undress and line up in front of trenches before being shot