Georgia and USA prepare another aggression against Russia?

The government of Abkhazia said July 8 that Georgia resumed the flights of its unmanned aircraft. 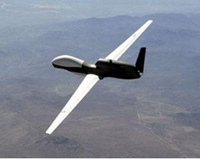 Georgia and USA prepare another aggression against Russia?

“The border guards of the Republic of Abkhazia registered two unmanned aircraft flying from the direction of Georgia to Abkhazia’s inland,” a spokesperson for Abkhazia’s Foreign Affairs Ministry said in a statement.

“Abkhazia is seriously concerned about the provocative actions, which Georgia resumed. These actions may result in a new escalation of the conflict. The government of Abkhazia would like to attract the attention of the international community to the incidents, which may undermine stability in the region,” an official said.

“We are particularly concerned about the fact that Georgia conducts provocative activities in the area of Europe’s monitoring mission in Georgia . Since there is no adequate assessment of Georgia’s actions from the European mission, Abkhazia doubts about the impartiality of the mission and regards it as an encouragement for Georgia’s military sabotage,” the statement from Abkhazia’s Foreign Ministry said.

Georgia ’s Defense Ministry released its own statement. “We do not confirm this information. Our aircraft did not transgress the air space above the territory controlled by the Abkhazian side,” a spokesperson for the ministry said.

The news about the appearance of Georgian spy planes above Abkhazia appeared one day after US President Barack Obama finished his visit to Moscow. Obama said that the US administration would not recognize the independence of South Ossetia and Abkhazia.

Konstantin Zatulin, the director of the Institute for CIS, believes that the appearance of Georgian spy planes in Abkhazia’s sky became Georgia’s reaction to Obama’s visit to Russia.

“Many politicians in the United States are concerned about Obama’s intention to normalize relations with Russia. Georgia is being very nervous about it – this country attempts to use Obama’s visit to Moscow to remind the world of its existence and provoke a reaction from the USA and Russia,” Zatulin said.

“If the spy planes were spotted there indeed, it means that Georgia aims to exacerbate the situation in the region. However, Mikhail Saakashvili, the nation’s sitting president, is unable to wage another large-scale war. He won’t be allowed to,” the expert said.

Inal Aliyev, an assistant to Ossetia’s vice prime minister, believes that Georgia and the West prepare another war in the Caucasus.

“The appearance of Georgian unmanned aircraft in Abkhazia’s air space testifies to Georgia ’s efforts to prepare another act of aggression in association with the West. A country normally uses spy planes to collect the information about weak and strong sides of the army of a potential enemy,” the official said.