The history of the economic crisis in Germany before the Second World War began with the signing of the Treaty of Versailles in 1919. The WWI winners deprived the country of a part of its territories with three-quarters of iron ore reserves. German was supposed to pay $33 billion of reparations. 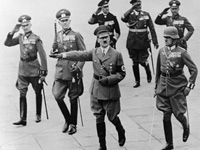 Germany plunged into the chaos of inflation. One US dollar cost 4.2 trillion Deutsch Marks. People were lining up for food brings bags of money along.

That was the time when Adolf Hitler urged the nation to switch to dictatorship to rescue the nation’s economy. German authorities conducted a monetary reform in 1923, which made the economy of the country grow.

Germany suffered most from the Great Depression in the United States in 1929. The economic setback in the United States deprived Germany of the source of finance. The frequent change of governments in the nation exacerbated the situation even more. Adolf Hitler became Germany’s fifth chancellor on January 30, 1933 . Everyone hoped that Hitler would stay at power for a couple of months, like his four predecessors, but Hitler gave all of them something to remember.

German banker Schacht organized a secret meeting of the new chancellor with Bosch, Krupp and other prominent financiers and industrialists. Hitler promised all them to do away with the crisis, communists, trade union, the Treaty of Versailles and to recreate the nation’s army. The oligarchs agreed to support Hitler.

Hjalmar Horace Greeley Schacht is a legendary persona. He chaired Germany’s Reichsbank in 1923, conducted successful reforms, stopped the hyperinflation and attracted loans from the United States. He became known as the savior of the nation. Schacht resigned in 1930 and became an official spokesman for Morgan, a renowned banker linked with Rockefeller and Rothschild. Schacht did a lot to help German Nazis and Hitler rise to power.

It was obviously easy for Hitler to destroy his political rivals. However, it was a lot harder to retrieve the paralyzed economy of the country with 68,000 bankrupt enterprises and a huge army of the unemployed.

On March 23, The Reichstag passed the law about the liquidation of the disastrous state in the nation. The deputies delegated full authorities to the chancellor. Schacht chaired the Reichsbank again. Fuhrer believed that Schacht was the only Arian who could outwit Jews in terms of finance.

Fuhrer issued the law about the reduction of unemployment in June of 1933. Over two million people started building autobahns, railways and channels. The government was reducing taxes for the companies that were expanding their investment activities and contributing to the growth of employment. The unemployment rate was halved in a year and was completely liquidated in 1936.

The nation extricated from the crisis in the heavy industry in 1935. The Fuhrer was getting ready for war. Schacht did his best to fund the defense industry of Germany. He used a parallel currency – Mefo bills – to cover a half of all expenses to rearm the German army.

Hitler was concealing his revanchist plans looking back at the international community. However, the crisis in the West gave Germany an opportunity to bid farewell to the Treaty of Versailles. Germany pulled out from the League of Nations. Germany officially announced its plan to concentrate fully on the defense industry within four years. Germany was controlling all of its imports strictly. The nation launched enterprises to produce synthetic rubber and fuel made of local coal since there were no oil reserves in the country. Over 250,000 people were involved in the aircraft-building industry.